Elephants in my life


Elephants are magnificent animals.  We’ve seen them, perhaps, at the zoo or the circus and realized the enormous size from a reasonable distance away.  I’ve been close enough to elephants to pat a trunk several times in my life, and actually did once.

In 1974 an arena was build in Richfield, Ohio, the Richfield Coliseum. It was home to the Cleveland Cavaliers and other more minor sport teams; hosted all manner of concerts and, of course, the circus.  There is a railroad track down in the valley, in Peninsula, at the bottom of the hill from Richfield.  I don’t know how the circus came to other towns, but here it came to Peninsula and went up the hill to Richfield.

The coliseum closed in the early nineties, but we came here in time to watch the last circus arrive and move up the hill.  That was an event in itself, as you can imagine.  People came from miles about and lined the highway for hours to watch the elephants go up the hill.  They came back several days later to watch the elephants march back down the hill to board the train in the valley.  Many other animals went past, their cages on open trucks, but they lacked the presence of the mighty elephants, trunk to tail, moving slowly past. 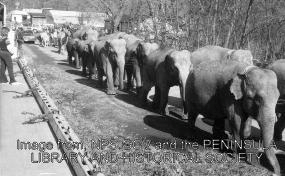 As if that was not enough for a lifetime, I had an even closer elephant encounter some years later.  I was exhibiting at Lincoln Center, with both Beth and Ann riding shotgun, and we stayed just across the GW in Ft. Lee, New Jersey.  The last morning Ann looked out the window down onto the parking lot and told us to please hurry over and confirm she was looking at elephants.  We hustled down and approached the huge rig parked at the back of the lot.

Two elephants were being led around the lot for exercise.  They were en route to their next engagement and the crew stayed the night at the motel.  We were allowed to approach, under the trainer’s direction, and look straight up at an elephant who responded by patting us down with a trunk.  It was an impressive moment.

My last elephant encounter predates these two by many, many years, but saved for last.  I lived in Willoughby, just down the road from Mentor, I was married, Beth was going on two and I was very pregnant with Shelly.  Oh, and it was summer and it was hot.  My husband was a salesman and had been given tickets to a small circus performance to be held at the Mentor High School.
I did not want to go.  I never cared for circuses, I was sick every day of that pregnancy and the thought of enduring circus smells while supervising a tot for several hours was overwhelming.  I could not persuade him to take a friend to use up that other ticket, or just take Beth, the hell with the other ticket, and so there I sat on floor level bleachers, early, so we would miss nothing, on a hot summer night.  All I recall of the entire event was the parade of the elephants around the gymnasium.  They were like a grey wall in front of us; I held a terrorized child on my lap.  I heard my husband curse and looked up in time to see a tail lift and an elephant patty descend.    It landed directly on his feet.
Posted by Joanne Noragon at 5:07 PM