A pint’s a pound the world around


My parents used to say things that made my head swim in their incomprehensibility.  I could not grasp the pint and the pound, especially when confused with other sayings such as a pint of feathers weighs less than a pint of lead.   Although a pound of each still weighed the same.

Another mystery saying:  we eat what we can and what we can’t, we can.  I did understand that a drip a second was eighty gallons a year.  My parents were big on waste not; I could visualize a dripping faucet.

Yesterday at supper Jan said Patti was mighty happy for all those acorns she hauled over for Patti’s fat chipmunks and deer to eat this winter.  In fact, the haul was so heavy Patti helped carry them up a flight of steps.

“How heavy were they?” right out of Laura’s mouth, and Jan said she and Emily had filled three gallon bags with all the acorns gathered so far.  “A pint’s a pound the world around” came right out of my mouth.  I felt like my mother.  But those two girls were on it like a squirrel on an acorn.

Emily helped Laura work out eight pints in a gallon and it was downhill from there.  “Twenty four pounds!” Laura announced in triumph.  “And lots more are falling!”

Patti’s friends will be deep on her porch, begging acorns this winter.  I wonder if she makes them finish before they leave.  I’m sure a few squirrels and a few chipmunks have made off with the acorns.  Jan may be responsible for an oak forest in Brecksville.  Laura and Emily will be even more responsible.  And those four legged friends of Patty should be sending thank you notes to two little girls close enough to the ground to pick up acorns and send them to the land of maple and ash trees. 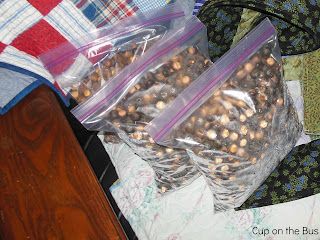 Posted by Joanne Noragon at 4:57 PM