Stories from our office

I was at a pretty little show at an upscale mall in an upscale Pennsylvania suburb.  All the exhibitor vans were parked in the designated area of the underground lot.  One lovely old woman I’d noticed come into the mall shopped in my booth on her way out.  As she was leaving she patted my hand and said “I want you to be very careful, my dear.”  Indicating some vans she could see through the doors she added “There seem to be gypsies in town.”


I asked Jan if she remembered any funny stories.  She only remembers the horror stories.  Like the time I came back from smoking a cigarette and announced forty school buses arriving in the parking lot.  That could only spell trouble.  We mentioned it to the exhibitor with porcelain dolls, which she put under the counter in anticipation.  The juvenile hoards did appear, loosely supervised, many sporting pop guns from the wooden toy fellow.  It was our last appearance at the Algonquin Mill Festival.  Those were the really old days, when we were feeling our way.


Jan did remember a Pittsburgh show.  I went to a deli for sandwiches for lunch and brought back pre-wrapped hero genre sandwiches from the refrigerator case.  She began perusing the list of ingredients.  “Jumbo!  It says Jumbo.  This sandwich has Jumbo.  What’s Jumbo?  I’m not eating Jumbo!”  The woman in the next booth was doubled over.  Jumbo, she informed us, is colloquial for boloney in Pittsburgh.  Her name, Jan recalls, was Darrellene.


Early on we divvied up.  Jan stayed in the studio, I went on the road.  I exhibited alone at most shows, but for venues I was not confident of handling alone, I’d ask Beth or Ann to climb in the van.  The several years I exhibited in an art show at Lincoln Center I had both Beth and Ann along.  One rode in the jump seat—a folding chair we made room for in the back of the van.  Lincoln Center produced a wonderful sour grapes story.  A potter friend we hadn’t seen in years called and asked if we could fill a booth at a Mother’s Day show she put on.  I declined; it was the date of the Lincoln Center show.  “Lincoln Center?”  Long pause.  “You must have had VERY good slides.” 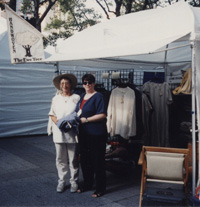 
One more story from the early days.  We were carding wool at a show, as well as spinning.  The wool had more than an ordinary amount of debris (we were still learning everything), and a good deal of chaff was accumulating on our laps.  I stood up to brush it away and a young woman who had been watching for an hour or more held her hands out to catch the seeds and stems.  I asked what she would do with the handful she lovingly clutched.  “I’m going to plant it and grow my own sheep.” 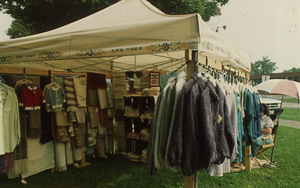