Pasha and the goose

There always were multiple cats at our house.  Even when we swore to NoToe there would be no other cats in his life time, there was Purrl, the reason NoToe ran away (the last time) and stayed away several months.


Pasha was the cat who was not a cat.  Quiet and demure.  Scotty was the patriarch when she arrived.  He fostered her, tutored her in mouse and chipmunk.  Unlike Scotty, Pash was tidy.  She left her evidence in the woods, not at the back door.  If questioned she would have denied any rodent encounters.


Other cats came and went over Pasha’s eighteen years of looking down on, over and past the other cats who ate from the same bowl.  I believe she fostered Xena, Warrior Princess just as Scotty had done for her.  But Pasha befriended no cat and certainly claimed no place in the hierarchy.  She was a free spirit who occupied my chair and let me sit in it with her come evening.


Pasha’s humiliation was Willie, a foundling cat determined to claw her way to the top and completely unable to deal with the cat who was not a cat.  Willie ambushed and attacked Pasha at every opportunity.  Pasha disentangled herself and walked away.  To her dismay, occasionally Pasha had to find a human to separate the Willie cat from the Pasha cat in order for Pasha to walk away.


Pasha’s joy was the goose.  She was only four or five when I bought a goose down comforter.  When she came to bed that night her eyes were wide with delight.  She couldn’t snuggle enough.  Thereafter she abandoned the chair in order to sink and luxuriate in goose depths.  When I took it off late spring her dismay was evident.  She only came to bed at night, not during the day.  She slept at my feet, not my shoulders.


The next fall I opened the cedar chest lid and pulled out the goose.  Pasha appeared from nowhere, running, and was on the bed on the goose as I shook it out and spread it out.  Pasha never ran, Pasha glided.  Except when she ran to greet the goose.  It was our late fall ritual for many years.


The comforter is as warm as it ever was, but it’s been a long time since I looked around for Pasha when the goose comes out.  Purrl sleeps there now, during the day. He doesn’t even know it’s goose time until he shows up.  Just not the same. 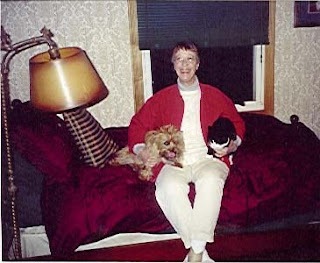