The rose is off the wheel

I weave limited numbers of each towel color simply because  two tubes of thread yield twelve towels, and changing to a new color at the end of two tubes keeps me interested. When I am at the end of a warp and there isn't enough thread left on the loom for twelve towels, I finish off the weaving in the same thread as the warp, for the cream colored towel. I generally get two or three more towels.

For some time now I've used a cream colored towel, folded into a rose, to disguise the ends of the towels in that circle of towels I make to show each new color, and the colors I have available. I found roses among the many tutorials out there on napkin folding. I've tried other shapes, too, but I liked the rose the best, and this last rose has been the best.

It was beyond easy to fold, and the fold was so clever it has not disintegrated with handling. So, it has been on the shelf of color wheel towels for some time. 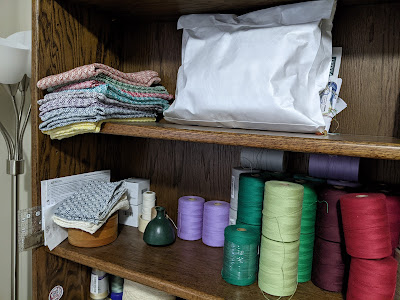 That stack of towels there on the top shelf are the towels to which I add a new color and turn into a circle with the rose in the middle. If I sell the very last towel of some color, I take it from that stack. I just checked back through a year of photos to see if I had a picture of the rose up there, in front of that white envelope, but no luck.

Today I had a customer with questions about colors, so I sent a picture of the two towels in question, lavender and cream. Both came from the color wheel pile, as I am down to one each. 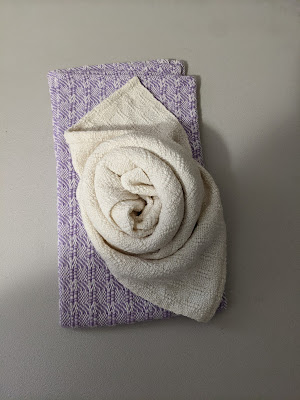 This is the photo I sent, and said I would fold the rose back into a towel. And the customer said, "Please don't. It's a gift."

So there you have it. The rose is off the wheel. And the lavender towel and one other I don't remember, in another order. But, the green is almost done. One more set of colored towels after that, and some roses.

And as so many of us are saying in signing off, that's all I have on this quiet Sunday afternoon. 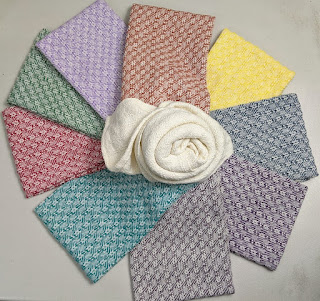 Posted by Joanne Noragon at 4:37 PM