Done with the past, the future has plenty of room for change (unknown author)

I worked to a deadline this week I just typed "weak" and laughed. But I did, just like churning out the budgets for five departments and getting them out and understood. Though actually that would have been done in November.

When I next warp, each of the forty spools will empty and need to be changed. That means stop turning the beam, make a note of the number of turns on the beam, get to the end of the thread on the spool, tie on the new spool and put it back on its peg. 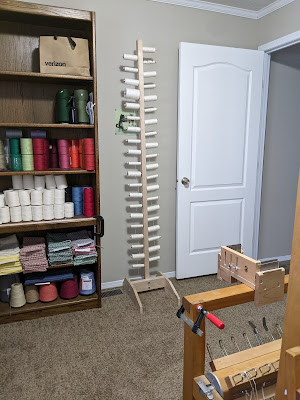 I was not truthful! When I put on a new warp last November, I had to change out one spool, that one on the left, fourth one down. This is the only job I consider really ugly, far worse than tying on a new warp, and you know how I despise that.

The topmost spools are out of my reach! I stand on a little stool, which really isn't brilliant. But, my tall sister agreed to come help me during the two weeks she took off at year's end. She will be here tomorrow. But, not before ten in the morning.

And I have worked to that deadline! I finished the warp on the beam, then fulled the lengths of fabric, and cut them. Yesterday I serged off the ends of the towels. I missed a knot in the serger thread and let it go through the eyes. Of course it did not make it. It was too late in the afternoon for me to understand, so Jan came to rethread the machine. That last hook that is threaded from behind. Saved!

Today I finished hemming everything, and took new pictures. I almost titled this post, Cream Rose on Top! And, it is. I straightened up my shelf. I'm in good shape for next year. 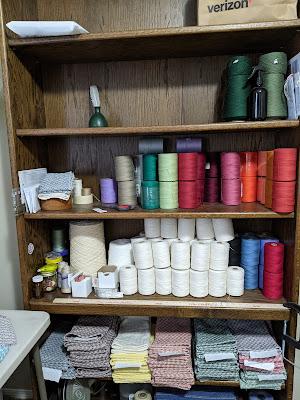 I cleared off the last of the old warp and got the loom ready to begin the new warp tomorrow. Ready to go. And I promise you, I will not rush tying it on. 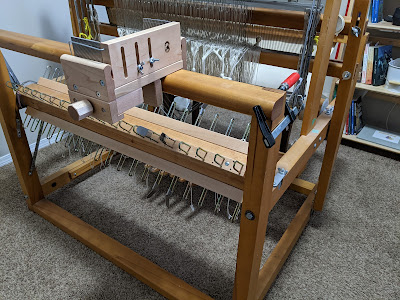 I read the fearless leader had promised a thirty day reign of destruction. I wonder if he may be frog marched from the scene before worse damage can be rendered. As if a massive intelligence breach is not damage. I wonder if McConnell has had enough.

Posted by Joanne Noragon at 4:49 PM