How near, how far

Twelve days until a new year. My calendar has two events; my youngest grandson's birthday, on Christmas Eve, and Christmas itself, the following day. I doubt I will be invited to any celebrations, even with Laura. She has relationships with her siblings, and that is good. They will be here far longer than I will.

This is close to the traditional time of surveying the year past, giving it a review. I generally feel no need to do that. This is not a general year, and it's taught me much.

I've quit whining. I've learned at long last, if something does not happen, don't attempt to engineer its occurrence, and especially do not complain, except possibly to your best friend.

And that is the end of my pontificating.

I did have an epiphany this week. Children grow up far sooner than they grow old. They are marvelous adults for a very long time before they undertake the job we old folks are engaged with, growing old.

Here's a truism. Every weaver knows this! At its end, a warp stretches. No matter how often one thinks "I'm done!", the truth is, there is another turn on the beam. 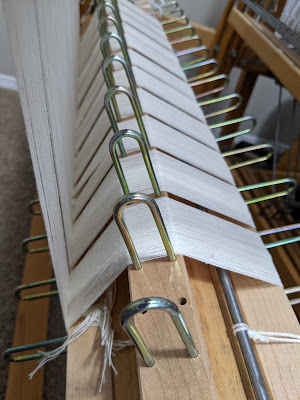 I'm weaving cream, to fill in that depleted pile of towels. I've decided that on the next warp I will dedicate the last set to cream, instead of tucking in a few at the end.
When I began weaving towels for sale, I changed the name of this color from "natural" to "cream". It simply felt better. I suppose someone said it to me and my brain decided that's how "the public" perceives the color.
We always called it "natural" because that is the natural color of almost all the cotton in the world. Cotton has been bred down to this cream color for so long, most of us have no concept that it comes naturally in brown, tan, green, yellow, red, blue...almost ad infinitum.
Sadly, there is not much market, except to handspinners. 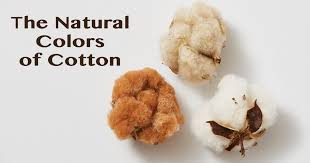 Posted by Joanne Noragon at 3:52 PM