Are young people taking up weaving? Or old people...?

David Gascoigne (Travels with Birds) asked in my last post, "are young people taking up weaving?" I've puzzled over answering that question these last couple of days. How could I, gone from weaving nearly twenty years, make an honest answer?

I did a fair amount of research. I checked the rosters of art shows where I used to exhibit for weavers, old vs. new. I called a national yarn shop owner I know and talked about who was currently taking classes, and her general impression of the weaving end of business. And, I talked to a weaving friend still going to guild meetings, who used to teach weaving.

The conclusion, weaving is out there. It attracts all ages. But, it is an expensive hobby. You better have a job. Or, be retired, and have disposable income. The loom I'm weaving on cost a thousand dollars--used. In the same post, Diane Tolley (On the Alberta Montana Border) mentioned her grandmother bought her first loom at age 76, taught herself and soon was showing her skill to a large convention.

Google "weaving schools". Google "where can I buy a loom?" Google "weaving magazines." You will be inundated with information, more than you can ever assimilate or use. You can learn how to weave, from a rug underfoot to exquisite lace and fine fabric.

So, I'll give you some paragraphs on my weaving career as fairly typical of taking the bit and going somewhere with it.

My aunt and uncle became weavers after my uncle retired. They were in a little town in Ohio, looking for an organ advertised for sale. They went into a shop to get directions and my uncle was mesmerized by the machines with treadles, just like organs. That was their story, anyway. He bought his first loom.

Much later my uncle became too ill to weave, and the looms were sold, the rug loom to my sister and two other looms to me. Our aunt did not have time or energy to teach us, so we did figure out how to weave by ourselves. It may be easier to take formal classes, but alternatively, we devised many short cuts to long processes that were invaluable in our weaving career.

Within a short time we hit a tipping point. We each looked over our shoulders and saw our output exceeded our ability to gift what we were weaving. The expense of buying supplies and material to weave to give away was becoming apparent. And, each of us was ready to leave our day jobs. So, we did.

At first we exhibited and sold at local shows, and in a couple of years were at national shows. We bought a house together, with a studio. We worked together as weavers from 1984 to 2002. Then my sister began her quilting career and I retired, got a new hip, and went to work for my township.

Eventually I began weaving again. Who all remembers when I fell back on old habits and began giving away towels? I actually gave away two hundred towels before I said obviously people like them, I think I'll begin selling them.

Any child who makes a potholder on a frame is a weaver. 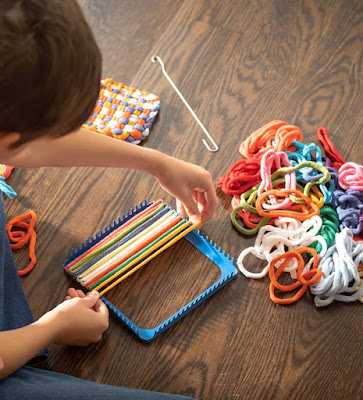 Posted by Joanne Noragon at 8:54 PM