I truly have little to nothing to post about. I've reduced my life to the basics of get up, take care of the cat (who was a snotty fellow today because his food bowl was empty and "she" doesn't bother herself until her teeth are brushed and her clothes are on), eat breakfast, weave awhile, watch TV, weave some more, eat lunch, weave, TV, weave, supper, blogs, bed.

Tonight, several hours ago, I was struggling with a blog here in my office, the lighted end of the trailer. Suddenly there was a pounding on the window, but it was dark and I couldn't see the pounder. I scuttled down to the door. That's a joke; I move at only one speed.

Cathy, my neighbor was at the door, to tell me Ann had tried calling for several hours, and now I should be home from anywhere and still didn't answer, so Ann called my sister, who called Cathy, in case Cathy knew anything and now my sister would be on her way over except Cathy said wait, "I'll go check!"

So, she pounded on the window and scared the crap out of me.

That kerfuffle sorted, I talked to Ann for an hour, then deleted the pathetic post I'd begun and read blogs until now. It's an hour till bedtime, and I did accomplish a stack of towels on my shelf of inventory today, so here are some pictures. 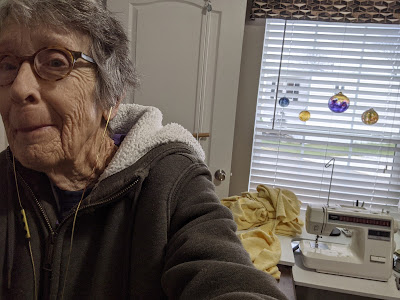 I hemmed almost the entire dozen of yellow towels today. I really, really need a haircut, but not until next week. 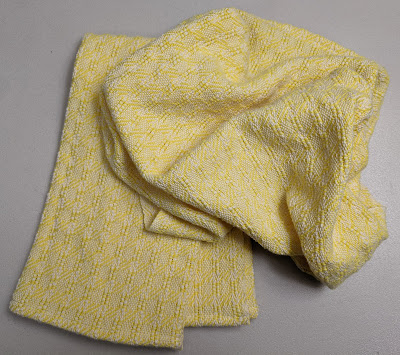 I posted their picture on the Towels for Sale page. 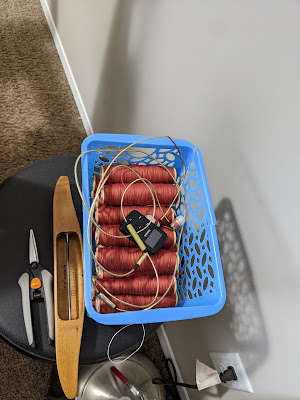 The next color is called rust. I really like it. I'm still listening to Edith Wharton. I'm on My Antonia, and I like it so much I may listen to it a couple more times.

And that's how I've waited for time to go by, since the last time. Let's all stay home for Thanksgiving, and probably for Christmas and New Year's. I hear those all will be celebrated this year at the White House, with large parties. I hope the house is tented and disinfected before January.

Posted by Joanne Noragon at 9:28 PM