How pleas the defendant?

Back in the beginning of time, when I had two brothers, my youngest brother was a tad wild and crazy. Before he was married he had an on and off roommate whose temperament matched his own. This young man also had a wild name that I believe he was assigned at birth, though his friends may have bestowed it at some time.

At this very moment I cannot recall the roommate's name, so I put in a call to my sister, who is eleven years more cognizant than I. If she calls me back before I post, we'll know the other young man's name. 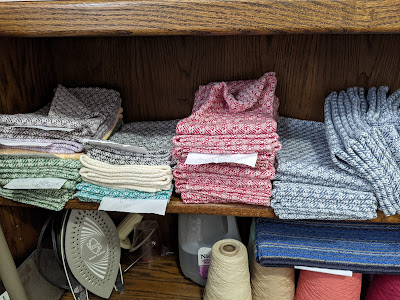 I went into the studio one day this week, and saw the shambles on the shelf of towels, and thought of my brother and the trials of the poor dog he and his roomie lived with. My roomie being a cat, a trial could never occur.

But their poor dog would be called to  view the undisturbed evidence and asked if he pleaded guilty to eating the rug, desecrating the trash, knocking down the lamp, eating the bowl of popcorn and so forth and so on.

Being a dog, this fellow would sit with a silly grin on his face and listen to the evidence presented. At the end, the dog was allowed to plead "Not Guilty!" And my brother and his roomie would look at each other and one at a time, each would announce "Guilty!"

And the poor dog lost, two to one.

I'll bet a few of you fellows have put your dog on trial, for want of excitement after a boring day at work. Fess up. Did the dog ever win?

Posted by Joanne Noragon at 7:09 PM