Well, I had my phone fixed this afternoon. There are two places to put it on Do Not Disturb. I didn't know about the second place. The ever helpful fellow at the phone store knew. Now I know, too. And I left the store to the tinkle of all the incoming texts and messages.

Laura moved over the weekend. Everything is in her studio except the bed. All her help bailed except one stalwart friend, and they got it all moved except her bed. Too big for the car. She's not fussed.

I learned all this when I called to see when we could get together, for help with my shopping. The awful season has arrived; we are under a winter storm advisory from today through Thursday. The snow total is forecast at four to six inches. The news feed for Peninsula warns it will rain for the next 120 minutes. That's two hours, bringing us to 8 p.m., and that is when the snow will begin.

The hang up with Laura and shopping is that she has no car. I am more than happy to go get her, but a bit of planning is required. The ten mile drive takes twenty minutes. That's essentially an hour total travel time just for that pick up and return, and I'd prefer to start before three in the afternoon.

I gathered myself up after lunch and went grocery shopping, brought it home, got it in and unloaded and put away. My hoodie was in the dryer, on high heat, that entire time, and still feels cold and damp several hours later.

I finished the rust warp and it's sitting on the washing machine, waiting for tomorrow. I ate supper, and here I am, writing a blog entry about shopping before the storm.

Tonight I'd intended to write about the envelope of pictures from my father's trunk. Although all the pictures are scanned, any information on their backs is over in the desk drawer, and I'm not getting up again until bedtime.

That is a picture of my father in gingham and a bandaged toe, holding his brother, in yesterday's post. The picture of the class has an arrow pointing to my father and his name written below. Here's another picture of a class he was part of. The next time I post, it will be more pictures, and the story of the envelope. 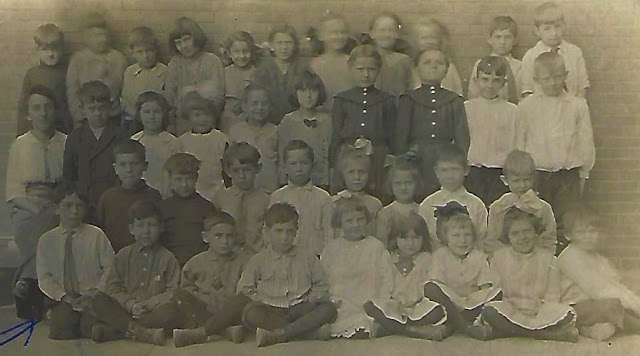 Posted by Joanne Noragon at 6:53 PM