I learned only recently the meaning of Shazam! A wonderful concept. I opened my door yesterday to a shazam moment. I wonder if I should have italicized the concept one more time. I was getting ready for bed, and checked my email before shutting down. A package had been delivered.

Last night was below freezing, no environment for a package. Down the hallway, turn on the kitchen light, went to the door and found the package. The interior package was a little white box, so charming I've tossed it into a drawer I occasionally go through.

The contents, the night light I ordered the day before yesterday. Think about that. One night I muse about the need and find and order the light, the next day it appears in time to be used. 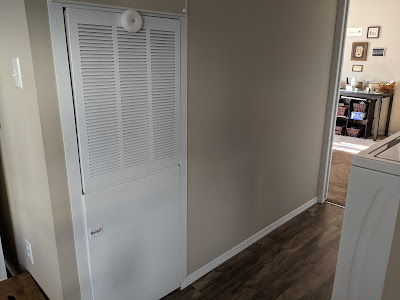 The hall, the kitchen light switch, my bedroom, dark unless I've deliberately left on the bedroom light. The new night light is there at the top of the grill device. I could have mounted it lower, on the solid panel. I may change it. 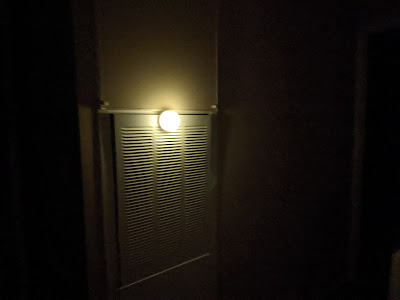 The best picture my phone could capture last night. It's wonderful! The instant I turned off the kitchen light, it was on and beaming. Shazam! I could see the hallway.

Now we need a shazam moment to turn the country. What a monumental problem for the new president. My friend Ann despairs of explaining the voting process to a friend convinced the election was stolen. It is not possible, but a great number believe it was. They don't know the process of voting and believe whatever was in their recent Kool-aide.

Accept that the "stealing" was done by individuals stealing away, taking up new ideas, voting for a different candidate.

I've come to realized that the loss of my two best friends in the midst of this presidential cycle by their choice, not mine, is a sad indicator of the direction we are taking, as a country. I've tried several times to bridge the chasm, and I probably will not stop trying.

It's another bright, bright sun shinny day. I off to the studio that is full of sunshine at this hour, and the blue towel length will be off this afternoon. Shazam!