Jacquelineand… at Cheapskate Blethering  took me on as a project. She offered to show me how to do a better job with social media to promote my Etsy shop, and for an example for me to see and learn from, dreamed up a little contest with a prize.  It’s a grand little contest, I am impressed. But you must click on the link over to her place to see the rules and the prize.

Jacqueline also suggested I provide some more information about the premise of the little Etsy shop, weaving, and gave me five questions to answer via my blog, Cup on the Bus. Since she actually gave me five and a half questions, and the name of my blog came right out of a weaving incident, I’ll make its story number six.

1. How did you get started weaving?

2. What do you enjoy most about it?

3. What kind of yarn/thread do you use? And why?

4. Do you have a favourite piece to weave?

5. What is the most time-consuming aspect of weaving?

5 1/2. If you had to choose between coffee, chocolate, or Scotch eggs, which would it be and who would you have it with?

Since the contest runs several days, I believe I’ll answer them a blog at a time. There’s a good story behind every question, and a good story teller can spin a story out forever. Or, tell it a day at a time.

How did I get started weaving?

Uncle Frank was casting about for something to do in retirement. He played the organ very well; perhaps restoring them would be interesting. He and Aunt Laura looked at an organ to restore in Lima, Ohio, and after lunch explored to the other end of downtown, The Oriental Rug Company. Aunt Laura said he just walked from loom to loom, besotted. She attributed it to the loom treadles, like organ treadles.

For whatever reason, looms came to their tiny house and took over the living room. The big Newcomb was delivered through the framing of the family room addition they built. Aunt Laura and Uncle Frank became excellent weavers, gave classes, sold at a local art show. Uncle Frank wove rugs on the Newcomb Loom that my sister eventually acquired. Aunt Laura wove placemats on a little Gallanger and exquisite scarves and runners on her favorite loom, a thirty inch Fanny LeClerc.

The only reason I know about these looms is because my sister and I eventually bought them.  I saw my aunt and uncle at family gatherings, but paid little attention to their weaving. Then my sister told me Aunt Laura was selling all the weaving equipment—Uncle Frank’s dementia was progressing to the point he could not weave, which depressed him more. Aunt Laura wanted all reminders out of the house.

My sister already had the Newcomb, and I was fascinated watching her tuck right into making all sorts of rugs. But, that Newcomb was overwhelmingly big. I couldn’t imagine sitting behind it and weaving a rug. Jan reminded me that Aunt Laura still had the LeClerc, the Gallanger and a table LeClerc for sale, plus all her weaving thread, yarn, and the rest of the stuff in a weaver’s repertoire.

In 1983, with the help of my brother-in-law’s truck, those beautiful looms came to my house, together with boxes and bags of tools and thread. The Fanny still had almost a full warp of Lily 20/2 cotton threaded Star of Bethlehem. If any of you are weavers, you will know I came home with the prize.

Our dear aunt turned away from weaving as completely as my sister and I turned to it. We quickly learned not to ask her questions, they were painful reminders of a happy recent past. Not until after Uncle Frank passed away could she discuss weaving, and by then my sister and I had turned to weaving as a career. Aunt Laura came for a visit to the home and studio Jan and I purchased together and went from loom to loom saying how happy she was to have visited “this little piece of heaven.”

And that’s how I became a weaver. 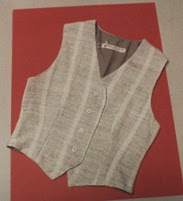 I made this vest for Aunt Laura from the first fabric I wove.

Posted by Joanne Noragon at 8:51 AM