Long, long ago I taught evening English classes. These were not youngsters there on daddy’s money. Evening students have already put in a full day on the job; they come back at night to get their money’s worth toward a degree to advance themselves in the working world. I had a smattering of eighteen year olds, but on the whole my classes were people of my age. I thought I related to them.

I carried away two profound experiences from one class. We were reading The Enormous Room. My thesis for the semester was Picasso, “Art is a lie that makes us see the truth.” It was the early seventies, the war in Vietnam was full blown, and I was a rather shallow twenty something.  I cannot remember what I said, but I know it was mildly anti-war. A few words in passing, on to the next…..

A young man toward the end of the first row erupted. He stood up. “You don’t know what you’re talking about. I have killed men with piano wire, or they would kill me….” He threw the book at my head and started to the door. I was first, and stood in front. “I am so sorry. I am abjectly sorry!” and I was.  He shoved me aside, and was gone.

I apologized to the class. In retrospect, that was another textbook psychological moment. On the whole they assured me I’d done nothing wrong, he threw a book at you, he might have knocked you down, and so on. I called the dean that night and saw her the next day. Her take was, “These things happen, don’t be concerned.” He never came back to class. I gave him an A. I remain humiliated when the incident crosses my mind, and it doesn’t matter that we know about PTSD these days. My arrogance remains bitter.

Another student left that class, too. It was freshman English, and I was supposed to be reinforcing their grammar. I also rode my motorcycle. My husband was between jobs, we were down to one car, so I  rode my motorcycle. I rode it to my day job, too. I’d say I drew the short straw, except he also had a motorcycle. But, I digress.

I was teaching grammar, and I said that sentence structure is another kind of engineering; if they could diagram the sentence they understood grammar. It was toward the end of the class, the exam was right around the corner. It was the school’s exam, not mine, so the evening was a last review.

I rode the motorcycle, of course. My Captain America helmet was sitting on the desk, and so was I, the easier to return to the board and put another word or phrase into the diagram. We were stuck on gerunds and participles. “Listen,” I said, “there’s a trick to telling them apart.”

A fellow in the first row leaned back, legs extended way out. “The only trick in this room is the teacher,” he said. I didn’t skip a beat. “Those are failing words, son.” He never came back, either. And, I did fail him. 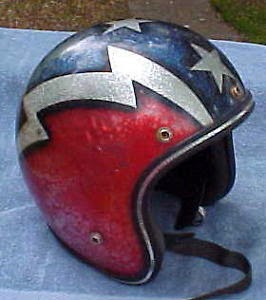 Cannot believe I found this on EBay, sold as a vintage sixties or seventies helmet. It's the one I had, although not mine, as I know what happened to mine.
Posted by Joanne Noragon at 12:34 PM

Email ThisBlogThis!Share to TwitterShare to FacebookShare to Pinterest
Labels: history