Do you have a favourite piece to weave?

Question four from Jacqueline at Cheapskate Blethering. Hop  over to see her contest.

I had favorite colors to weave for the different kinds of shirts we made. I had to learn to weave red when I’d prefer to be weaving blue or green. Just because I didn’t like red (back then), more than a few people did. I would never be able to sell them a green shirt, and better have a red one on hand if I wanted to make a sale.

My very favorite piece we made for a short time, in the beginning, was a baseball shirt. Cut exactly like a baseball shirt, with tails and everything. It was too gender specific, so we retired it soon. I had one that I wore close thirty years. I lost it twice, and the second time it didn’t come back to me.

I wanted to add a jacket to our repertoire, and bought some soft, heavy cotton in three colors, natural, beige and natural/beige variegated.  I commenced putting the natural on my beam. I liked it so much, I put on a lot. It began running out just a few inches in. Well, in for a penny, in for a pound. As the natural ran out I continued with the variegated, and then with the beige. I wove with the beige. From left to right the fabric was natural, natural and beige variegated, beige.

What could I possibly make with it? I set it aside and thought. Eventually a raglan jacket came to mind, with like colors running into each other at the raglan sleeve and tying the jacket together. It worked. But the softness of the yarn was the big hit, not my clever salvaging of a stupid beginner’s mistake.

It is called softball yarn, one unspun strand of roving plyed with a second fine cotton thread. We made it into a hooded jacket with a zipper and full facings. It was the most constructed garment we made. For twenty years. It was “the hook.” It was thirty percent of our business.

We could not wean the public from it. By the end, as we slogged through weaving another run of fabric and sewing the jackets, we came to call it the jacket from hell.  Shhh. The customers  never knew. Then we retired. I gave the patterns for the jacket to a customer who intended to learn to weave to keep making it. I wanted never to be tempted for any reason to deal with that jacket.

No pictures today; I never used a picture of that jacket for a jury picture.


Although there are no jury slides of that jacket, I have friends with files. Linda has owned her jacket since the mid nineties and kept it in her van for emergencies requiring more clothes. Here she is in 2006, on her way to Race for the Cure in Cleveland. 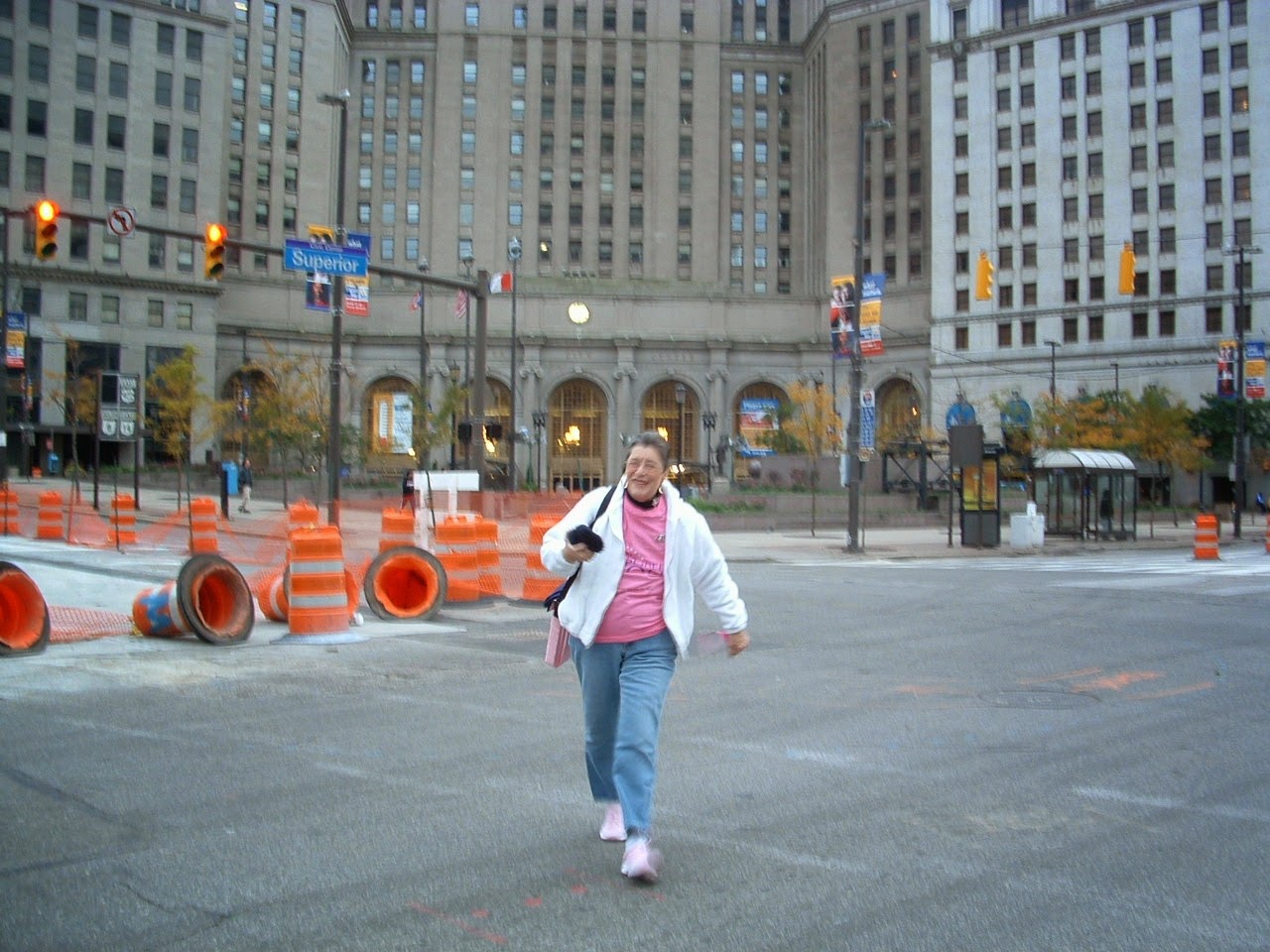 Cara, helping a customer select rugs at St. James Court in 2011. Cara now owns the jacket, having borrowed it without returning it. 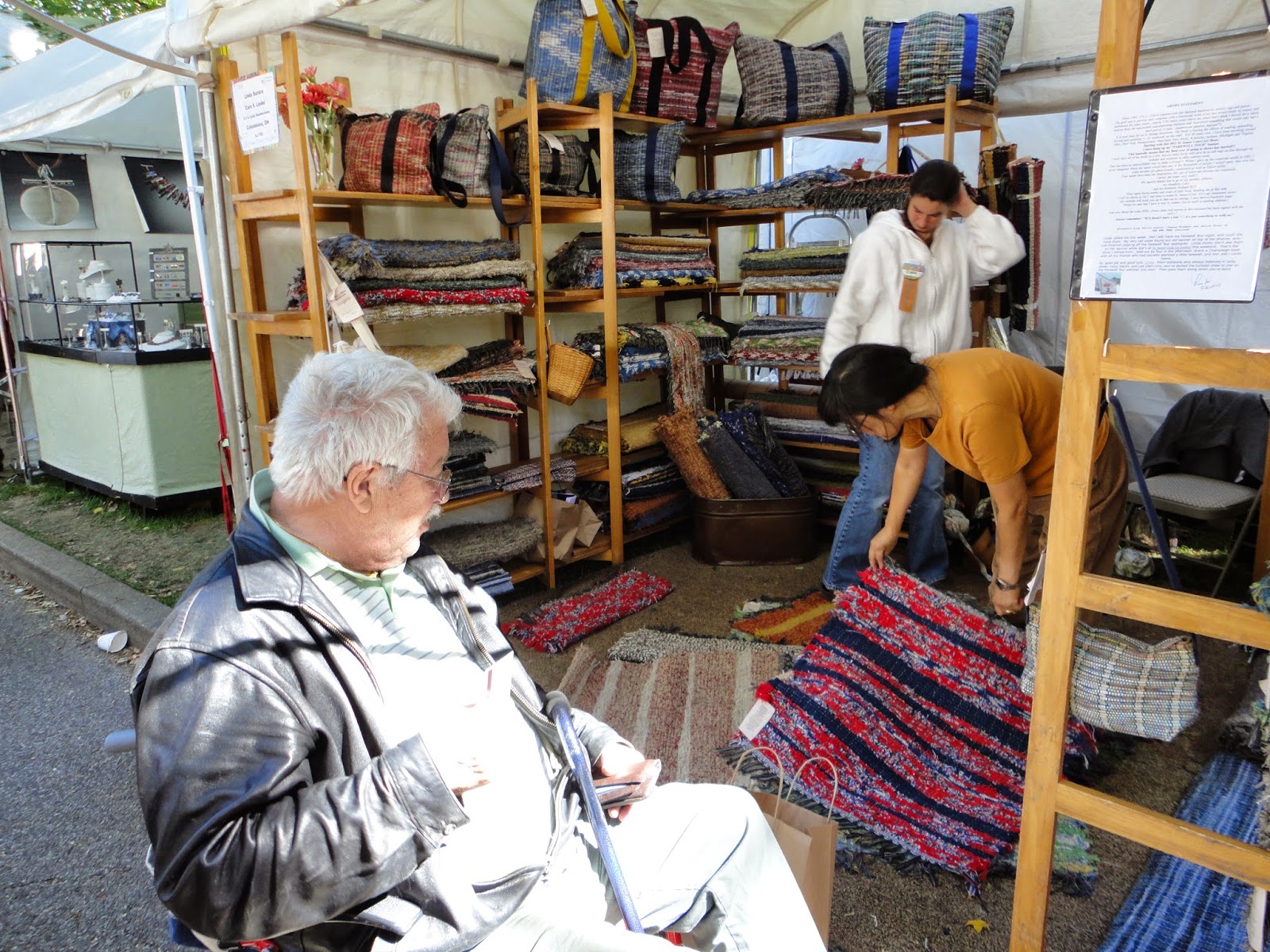 I have another picture of Alberta, Linda's mother wearing her jacket. It is embedded in an email; I'll post it if I can figure out how to  isolate it. 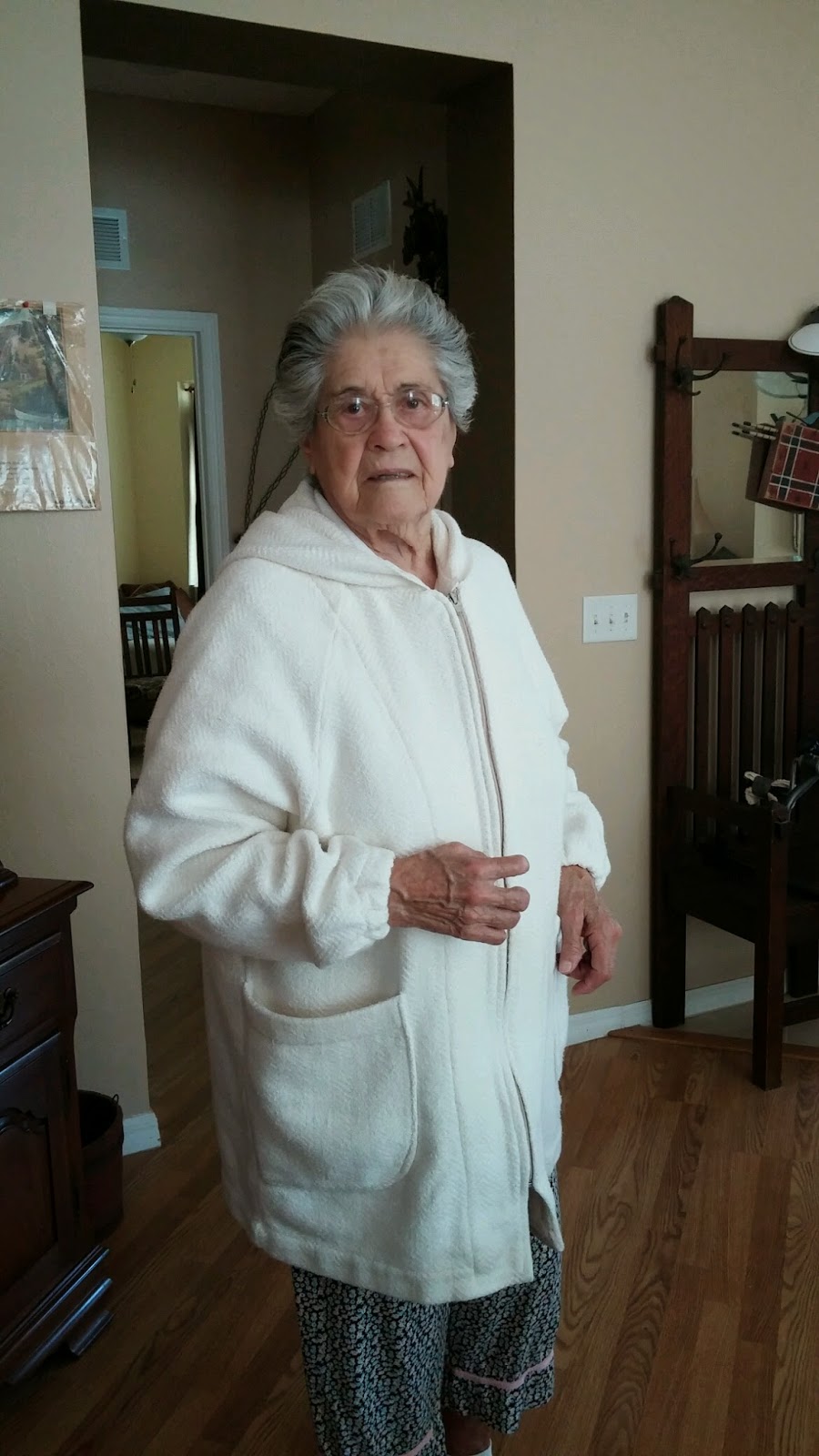 Alberta, Linda's mother. The shorter jacket did not suit her, and she bought the longer version. You would be right in thinking it came about by popular demand.
Posted by Joanne Noragon at 9:22 AM