I can say that with authority, as I am deep in both.


Way last year I wrote about my father and his brother and sisters in the Childrens’ Home, and included my Aunt Laura’s magnificent Chronicles.  I thought it a poignant story of events that happened more than a hundred years ago.  I had comments from several readers who had similar childhood experiences, or had listened to relative’s stories.


When the Childrens’ Home (now called Children Services) responded to my request with their records of my father’s stay at the Home, it was a scanty type written page transcript of records they had recalled from deep storage in another state.  The records were returned before I had opportunity to see them.  I did ask for and received a copy of the one record they identified in the transcript, a letter from Peebles County in Colorado notifying the Home that George Lytle, my father’s father, had died there.  But this avenue was quite the dead end.  The woman in the “Client Rights Office” was prompt to tell me these were not public records I was requesting and they had no legal mandate to help me, but she was doing as much as she could, short staffed and all.  Or, don’t bother her any more.


I took one nugget of the Home's information and ran with it.  “Our records indicate Mr. Lytle left the family in 1918.  He was located in Coalmont, Pennsylvania but did not appear in Court in Pennsylvania.”  Bingo.  Why was my grandfather required to appear in court?


I trolled the internet to see if I could find court records for an obscure hamlet in Pennsylvania.  I came across the historical society of Huntingdon County, where Coalmont is located and sent them an email asking if they could tell me what court to approach.  They replied with several suggestions, and concluded by saying that for a forty dollar donation they would go look for me.  You can believe that went in the next outgoing mail.


Within two weeks I had a packet from a genealogical researcher with copies of court records concerning George Lytle’s order of extradition to be turned over to the State of Ohio.  And an offer of further help, if requested.  I sent another forty dollar donation, the cost of the return tank of gas.  What a bargain.


I have written to the Summit County Clerk of Courts to learn what courts were in operation at the time of the order of extradition.  That has been two weeks; I may have to get another historical society involved.  I’ve pieced enough together, though, to have an interesting story to post tomorrow. 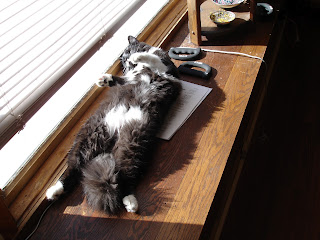 The sun is melting all the snow and seducing the cat. Jan quoted me the song Good Morning, Mr. Sunshine.

Posted by Joanne Noragon at 4:55 PM