The Blimp, The Blimp 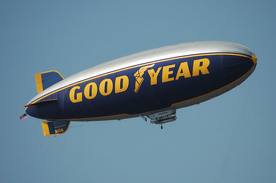 The blimp just flew over our house.  It goes right over our side yard.  We’re used to it; the blimp goes back and forth regularly for Indians games, Browns games.   When it came over I thought “Monday night football.”  I took a look at the sport section of the paper and see the Browns lost yesterday, so I’ve no idea why the blimp is going to Cleveland this afternoon.  It will come back again tonight, very slow and rumbly.  If I’m asleep I’ll hear it and think “the blimp.”  For the briefest second.


I’ve known the blimp since I was old enough to look up at things in the sky.  When young I said “My Dad made that!”  Of course he didn’t, but he did do the electrical design for the blimps.  We knew all about lighter than air, growing up at our house.  By the time I was old enough to understand what blimps did the war was over.  But dad told us how the blimps sailed high, high in the sky, lookouts for the convoys of troupe and supply ships crossing the Atlantic.  The pilots of the blimps were in contact with the captains of the ships and warned of enemy ships and especially of possible submarines.  He said it was a very dangerous mission and the pilots were heroes.


There was only one car in our family for years and years; if Mom needed a car during the day she took Dad to work.  She’d put on her coat over her nightgown in the morning.  On the way back one morning she had to change a flat tire.  “There’s where mom changed a tire in her nightgown!” We would pile in the car and get him in the evening.  The sight of all those men walking out of buildings and up the sidewalk at five at night was impressive.  We’d watch and watch, and then we’d see Dad.  The air dock loomed over everything. 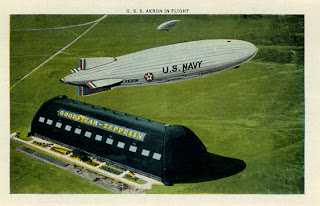 For a long time Goodyear’s advertising slogan was “Go, Go Goodyear.”  The blimps that went over head carried lighted message boards:  “Go, Go Goodyear,”  flashing the G and o of Goodyear on and off two times. There was a huge billboard in the flats in Cleveland, flashing the message. A wonderfully alterative phrase for three kids in the back seat to shout over and over.


I have no idea why we were there, but one time we (Mom, Dad, my brothers and I) were on the tarmac when a blimp docked.  What a sight.  All the noise stopped when they were ready to land; the big ship sank and sank, the ground crew caught the lines and guided the ship to the ground.  The air crew left the cabin and the ground crew walked the air ship right into the air dock. 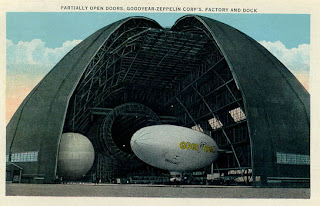 When I was nine or ten I was inside the air dock for an open house event.  It was umpteen football fields long.  I cannot recall the big number.  There was a cat walk far up around the inside of the building.  Dad said that during the ‘40’s his office was up on that catwalk.  The building is so huge it creates its own atmosphere; it can rain inside the air dock.  And, in one of the most interesting coincidences of my life, an engineer I worked with, at a company two counties away from Akron, Ohio,  told me he got his bum hip right there in that air dock.  He designed parachutes and he was “proving” a design to a client of his company in a controlled jump there in the air dock.  On the third jump from the catwalk the parachute partially failed and he crash landed on his hip.  He also told me he was an Hungarian army officer, escaped as a Russian POW, with his money still sewn in his underwear and was able to fool a German officer because he knew how to use a fish fork.  Wonderful old man. 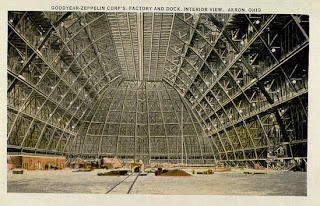 Of course when we were kids and the blimp went over, everyone on the street turned out to look at it.  I could raise pretty close to the same enthusiasm in my kids, “The blimp, the blimp.  Your grandpa built it!”  If my grandkids are out, they’ll look up, if told.


Jan and I have a good friend who retired from Goodyear Aerospace.  She survived the attempted takeover by Goldstein twenty five years ago, and then its purchase by Loral.  Some world wide offices were closed and the Goodyear flag that flew over the Belgian offices came back to Akron.  Marilyn gave it to us and for years we flew it on Dad’s birthday.  It’s too raggedy and mended now, so it lives in a drawer.  I wonder what awes today’s youngsters.  I’ll be glad to hear the blimp on its way back to the air dock tonight. 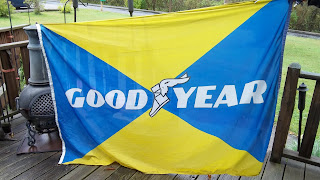 Posted by Joanne Noragon at 5:18 PM