Mom learned young how to quilt.  Grandma Troike was her teacher and taskmaster.  Grandma Troike was her father’s mother, the widow who married Lou Troike in 1908.  Mom could remember working on quilts with Grandma Troike when she was about ten, and being rapped on the head with Grandma’s silver thimble if her stitches were too long.  Grandma’s standard was twelve to the inch.  Mom’s own standard was ten.  My few forays into hand quilting certainly did not yield that result; I couldn’t even handle those tiny seven between needles she flashed in and out of the fabric.


Mom’s first quilts probably were embroidered squares purchased ready to embroider or as iron on transfers, ordered through the newspaper or purchased at the corner dry goods store.  I have a collection of embroidered samplers she said were purchased as stamped goods from Rusch’s Department Store in Cleveland.  I can’t locate any reference to it; perhaps it was a small store like Scott’s in Akron.


I grew up with two quilts alternately on my bed.  One still exists; embroidered Kewpi dolls in blues and browns, set with blue sashings which have faded.  Kewpi’s were popular in the ‘30’s and this set of transfers is still available.  The quilt went on other beds after mine, and today literally is thin and seer.  Jan has it preserved in her collection and takes it in her trunk show, “My Mother’s Quilts.”  The quilting is a simple diagonal pattern. 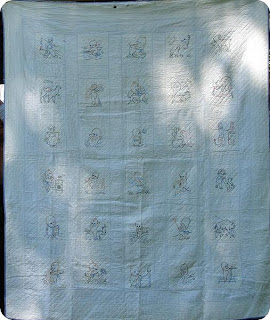 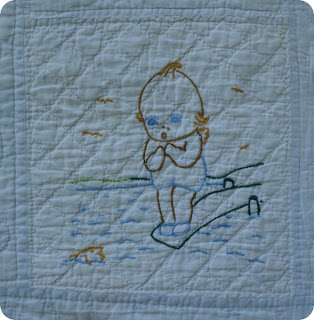 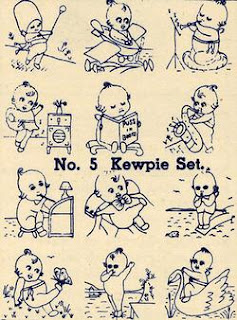 The other quilt I remember sleeping under was also embroidered, crewel embroidery of birds of paradise.  Each bird was a small round bird motif, no more than four inches in diameter, done in the center of a block about six inches square.  The birds were embroidered in fine wool and the colors were vivid.  There were many birds on the quilt; their colors and plumage fascinated me, and I never found two alike.


Mom’s friendship quilt is the other quilt I remember clearly from childhood.  It was on Mom and Dad’s bed.  Fabric embroidered to depict a church is appliquéd to blocks, each signed by a friend.  Mom’s block, dated 1936, is in one corner.  I laid on the bed and traced out the names and asked mom about them.  The only name I remember is the girl they thought Uncle Hank would marry.  But he didn’t. 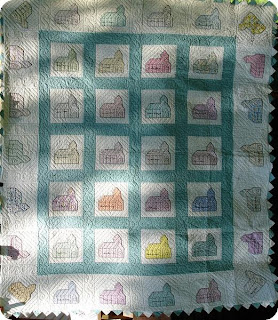 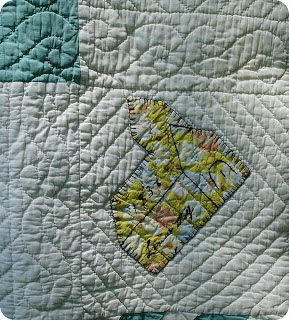 Mother’s handwork is exquisite.  Her embroidered tablecloths, drawn work runners, scarves and doilies have been passed along to people who love and use them.  I keep her monogrammed linen runner on a little chest.  She went on to make many pieced quilts, but I’m sure the early quilts used her other needlework skills.


We visited quilt shows together.  Mom always admired another woman’s work, but was a bit of a quilting snob.  “Not ten stitches to the inch!  You could stick your toe through those stitches!”