The wonder drug of our childhood.  On the chest, on the back, a quick wrap up in a flannel strip and you’d be cured in the morning.  I think the cure was effected because kids didn’t know they were sick.  Mom had a vaporizer, too, and some brown stuff put out an interesting smelling steam.


Mom never quit the Vicks©.  She subscribed to its simplicity.  She never took more than aspirin for pain, either, and I doubt she took more than ten of those in her life, in spite of arthritis.  She wouldn’t take anything “stronger” because some day, she knew, she would be in pain and wanted whatever “they” gave her to work.


Sorting through the meager supply of meds she left behind, I found her beloved blue bottle.  What the heck, I put it in the cupboard.  That was fourteen years ago and I’m sure it was already old then as she only had herself to doctor with it. 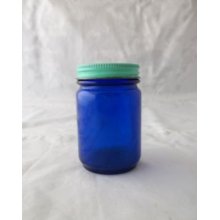 One day Tom came back from a trip to the drugstore.  His dad had requested a real jar of Vicks©.  Apparently the jar is no longer glass, and his dad knew it was a sham; not the real deal.  Tom spent an afternoon studying jars with no luck.  I remembered the bottle mom left and produced it from the back of the shelf.  It must have hit the shelf one time too many; there was a spiral crack running right around the glass of the half full jar.


But wait.  Tom had an old half full jar from his childhood.   Careful disposal of the old bottle, a satisfying schluupp into the intact jar, on went the lid and there was a jar of Vicks© for dad.  It was delivered more than a year ago, with instructions to use it sparingly as it was the last jar to be found.  Dad is being very careful with it.  Tom was the only son who could even locate the stuff, and it is the very last blue bottle to be had.
Posted by Joanne Noragon at 3:47 PM