Holiday's over; back to work

Actually, that title is a joke. I wonder what most of the people here do all day. I wouldn't know what to do without work! 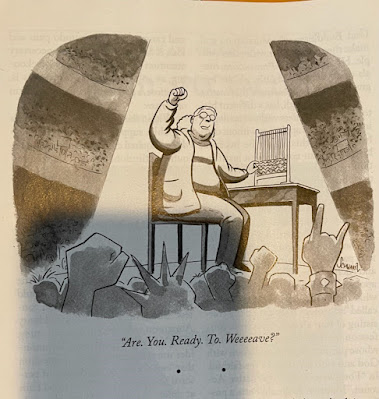 Someone sent me this cartoon; I wish I could remember and say thanks. Back in the day a Statie stopped me for "weaving". It was on Interstate 80 in Pennsylvania, between the last PA exit and the Ohio border. There is a series of low rolling hills in the median and a police car, or worse yet, a State Highway Patrol would use it for radar cover.

This incident was in my early days of exhibiting, and I drove a white panel van. I've come to learn this type of van was popular with drug transporters. Mine was full of totes with lids, holding all the weaving, plus 2x2 racks for display and more totes with "stuff" for the booth.

Nipping along at the speed limit, suddenly a flash of light blinded me. This man knew how to deflect it from the mirror into my eyes, from the windshield into my eyes. It was the most intense light I've ever encountered. Fortunately I had the road to myself at two or three in the morning, and when I could focus, I steered off the road.

The State Highway Patrol sauntered up and asked if I knew I was weaving. I answered that at the moment I was not. I asked to see his badge and ID, which he showed me through the window.  I displayed everything he requested the same way. He copied my info into a notebook and went back to his car to check it.

When he returned he invited me to step out and come look at my plate with an expired sticker. He pushed the dumbest button. It was Memorial Day weekend. The plate expired on June 1st. The last thing I did the previous week was put on the new sticker and head for New York state. I held up the current registration, to which that little sticker is affixed, until removed and stuck on the plate.

There was more chat, in which I was invited several times to step out. Eventually he said I was getting a "warning for weaving". I would not lower the window for him, but did tell him to mail it. I encountered the officer one more time, but that's another whole story.

This was the mid nineties. I had a cell phone; one of the first on the road. When he came up I held it up for him to see and pointed to the screen, to which I had keyed 911. I said if I anticipated trouble, I would press send. He said, "Ma'am, I am 911" and I replied "There are bigger 911's than you!"

I've devoted so many paragraphs to this, here's one more. He shined that effing light into every window, looking at the sealed totes. "What's in the totes, Ma'am"

"My stuff." My stuff took up an hour of his time not gaining access. The next time I was stopped, several years later, I cheerfully pulled lids and explained what they were looking at. That was the first weekend after 9/11 and every van (and auto) going to an art show in America was searched.

My neighbors at one show made fountains. They took the precaution of switching out the red gasoline containers in which they carried the water to be pumped for bonafide blue water containers. They did have to empty them and find water inside the venue.

There's an old adventure for you!

I finished my red towels yesterday, and have the blue cobalt bobbins wound and ready to weave. There should be one more run of towels and then I'll have to warp again. Here's my shelf of towels. You can see them even better at everythingoldisnewagain.shop. 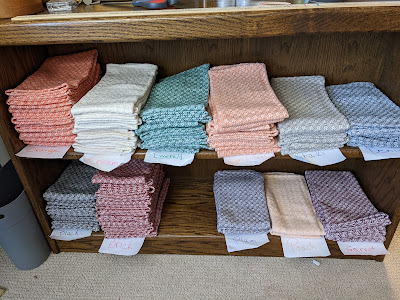 And, finally, my curtains came. 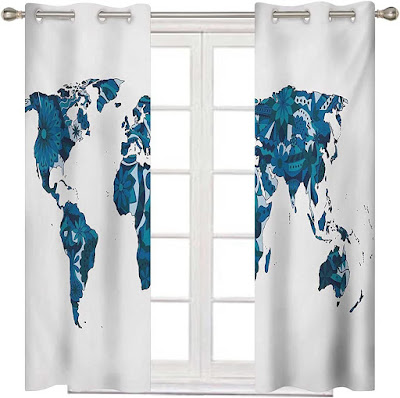 I like these. Dale is coming to put up the rods and help with a couple other tasks. I met Dale at Shelly's little celebration for earning her Master of Science, Nursing.(l).

All that's left to get is the cat. I met another resident who has an old cat, for the "good company." Her cat is a middle teen.

Posted by Joanne Noragon at 2:09 PM
Email ThisBlogThis!Share to TwitterShare to FacebookShare to Pinterest