Thursday was a lovely day. I had to go out for that horrid pulmonary function test. I seem to have done well enough, though there were no "standards" indicated. We'll see.

Shortly after I was back, a light rain began to fall. The day before there was a little rain. The scaffolding went up another layer to probably about eight feet, and blocks were raised to the new platform, but there seemed to be dissension on the site.

The rain continued and the crew did not want to work. Supervisors eventually appeared and walked the new platform and indicated work was to continue.

The crew left; the only work accomplished the entire day was the laying of what I took to be the gas line. That didn't begin until well after noon, although that contractor was there at 7 a.m. in the morning, and waited more than an hour for any crew to appear.

Bringing us to this morning. Joanne, who must know everything, was at the window in her nightgown. The scene stunned me. Take a peek: 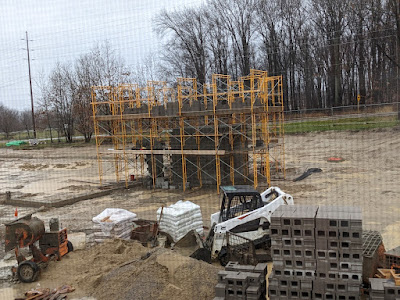 I've finally decided this structure is an elevator shaft and they really are building more two story units. Blocks are missing. Much of some walls are missing. There is no question it has rained all night. I know nothing about the structural integrity of wet concrete, but I bet all those kids in the crew did, and were arguing strongly for the current lack of structural integrity. 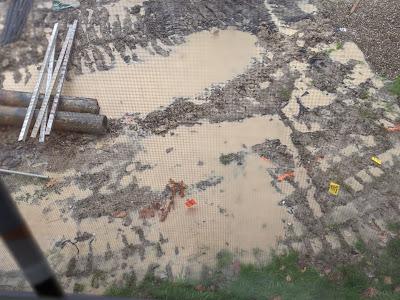 Here are flags for gas (yellow) and the orange flags are water, I think. That pipe in the center left is old and not structurally sound. 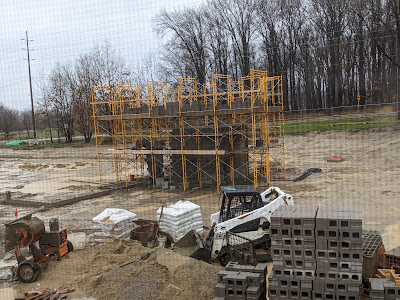 Another picture of general wetness. Whoever buttoned up the site last did a questionable job. The concrete isn't covered; neither is the pile of sand.

Around noon today, still in the drizzling rain, one of the contractor vans appeared and a white haired man with an expensive short beard and moustache eventually got out into the rain, took that shovel jammed into the sand pile and began trenching out to the service road on the right hand side of the picture.

Posted by Joanne Noragon at 7:30 PM
Email ThisBlogThis!Share to TwitterShare to FacebookShare to Pinterest