When I woke, hours ago (it's four in the afternoon and soon I must go to supper), from my bed I could see a framework going up around one of the foundations. It was some time before I retrieved my glasses and took a real look. It probably was close to ten. Here's what I saw: 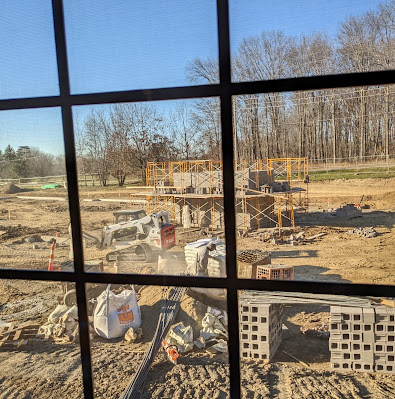 I cannot imagine, but I'll keep my eye on it. Don't want anything going wrong out there.

My day was the usual busy. I ate breakfast, did a load of laundry, wove a couple more bobbins, put the laundry in to dry, ate lunch, retrieved the laundry and folded it. Stacked it neatly in the rolling crate and then laid down to take a nap.

Naps are self regulating. If there is nothing important going on downstairs, I don't bother to wake up until I do. Today was scrabble, and I've joined in from time to time, but my scrabble abilities need a lot of re-honing. So I didn't make any effort to wake up and just did.

I put away the laundry, and then spent an age trying to edit this photo, which included altogether too much windows. Speaking of windows, the curtains are on order and the hardware is in. I'm putting off talking to John about installing the hardware. No sense in stirring sleeping dogs until the curtains are delivered.

He seems to be unhappy with me. My last request was installation of new towel racks I bought. This involved a lot of "be right back(!)" and huffy exiting for more equipment. When he finally left I went in the bathroom to look and saw I must rehang towels.

When I pulled the second towel over its bar, the top of the rack slid out of the wall, pulling out the screwed in plugs. I stopped at once and gave myself the rest of the day to think about it. Eventually I rounded up my lovely Gorilla Glue and trusty hammer and deposited them in the bathroom to await the proper moment.

The next morning I applied dabs of glue to the two recalcitrant plugs, and gave each a mighty thump back into the wall. One morning later I gave the rack a substantial pull and feeling only resistance, I rehung the towels and took a shower.

That was a week or more ago. I would like to give John plenty of time to forget about the job before he sets out on curtain rods I may need to figure out how to repair.

Posted by Joanne Noragon at 4:29 PM
Email ThisBlogThis!Share to TwitterShare to FacebookShare to Pinterest