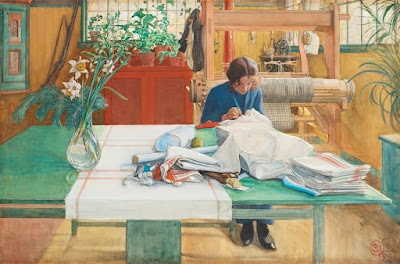 Carl Larsson was a Swedish painter, primarily representing the Arts and Crafts movement. He is principally known for his watercolors of idyllic family life. He had a childhood of poverty and indignity; the family was often evicted from the current revolting housing. His father, a casual laborer, cursed the day Larsson was born, and Larsson harbored a lifetime hatred of the man. His mother worked as a laundress to keep the family fed.
Carl Larsson's life took a better turn when a teacher at the school for the poor encouraged him to apply to Royal Swedish Academy of Arts. It took him some time to feel settled in and accepted there, but he gained confidence and was promoted through the school.
He worked as an illustrator and graphic artist and his wages even helped support his parents. He settled into the Scandinavian Artist colony outside Paris, where he met his wife, Karin Bergoo. The couple had eight children, and the family were Larsson's favorite models. Many of the interiors he painted were the work of Karin Larsson, an interior designer.
Through his paintings and books, their Little House interiors became world famous and a major line in Swedish design. The house is now in the family and open to tourists May through October. The room in this painting is The Workshop. It was the main gathering room, and when the family outgrew it, Larsson built a new Workshop. Karin at once took over the old Workshop as her own, and it remained a gathering place.
It is surmised this watercolor is of Karin, hemming towels for a daughter's wedding.
The first time I used this piece, we moved around the room naming all we saw. The room reminded me of our first studio, with looms and sewing machines, plants, and tables. I did not see the gun on the back wall until it was pointed out to me.
Knowing more of Carl Larsson's life and family, it makes sense now. Larson lived from 1853 to 1919. This was a family room in a rural setting in Sundborn. The gun was a practical implement to save the family garden from animal marauders and stock the stewpot.
If you call up Carl Larsson on the internet, you will find pages of his images and this room in many, including a spinning wheel and a weaver at the loom. There is a watercolor of Karin at the sewing machine.
My thanks to Cathy at StillWaters, who first sent me a link to the picture.
Posted by Joanne Noragon at 5:10 PM
Email ThisBlogThis!Share to TwitterShare to FacebookShare to Pinterest