A blunder of errors

I was not looking forward to yesterday. In the afternoon I would have the second two of four cavities, spread across four teeth, remediated. How does one come up with four cavities, you inquire. My best guess involves six or seven weeks on my back, access to a toothbrush few and far between. None weight bearing broken femur...

Not my mistake. I saw an aid at best two days out of three.

Anyway, as unfortunate as I counted the day of dental remediation, the fickle finger of fate interposed herself to unscrew some dumb errors to my granddaughter's medical calendar. It began with a phone call from upstairs, where my granddaughter has an adequate den across the front of the house.

"Grandma, I know you have a dental appointment this afternoon, but I wonder..." I love that sort of phone call. I find my sister and my daughters willing to grant favors, but it often does not extend to grandchildren.

After a bit of schedule checking on both parts, it was very apparent my granddaughter had lucked into a ride to and from her very own dental appointment in another city, though not for an afternoon appointment for another doctor appointment. "It's OK, Gramma; I can Uber that one."

Unbeknownst to Ms. Lucky Ducky, I intended to send her on two errands as we drove home from her appointment; nip into Dollar Tree and buy a new bottle of Tylenol for me, and into Kreigers for four apples. Turnabout is fair play.

I parked across from a reconstituted building: Belltower Brewing Company, the First Congregational Church one hundred fifty years ago, now a brew-pub. The cast bell, forged in 1867, rings the hour, every hour. I took a picture. My phone rang. 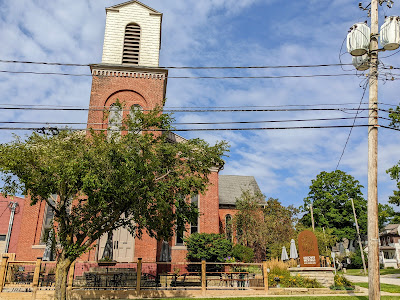 "Grandma, they forgot to put me on the schedule, but can work me in in about an hour. I guess I could Uber home."

Since my appointment was 2:30 in the afternoon, I said I would wait. She was so happy. When she arrived, I told her about the Tylenol and apples. "We could get the Tylenol right at the gas station there!" and I pulled in. I dug in my purse, found four singles, and off she went. In no time she was back with a little box of six Tylenol and less than a dollar in change. I invited her to keep the 'silver' for herself.

When I was over myself we headed for her other appointment in Hudson, and had fun working into Hudson via the back roads from Kent. I realized I could cut through the shopping plaza, get four apples from Acme and get her to her next appointment with an hour to spare.

Things were looking up. I sent her with a card this time, and four nice apples set me back $3.46. I had one for lunch today. Juicy and crunchy. Very good. We'll see if the Tylenol work. I was too beat up from my appointment to take any yesterday.

Posted by Joanne Noragon at 5:56 PM
Email ThisBlogThis!Share to TwitterShare to FacebookShare to Pinterest