I feel it's been a month since I last posted, but it's only been three or four days. My brain and shoulders continue to sag under the sadness of killing of American school children. I am so helpless. I can only envoke my grandmother's call to action, "Pull up your corset strings girls, we have work to do". Vote. Get out the vote. It's become my mantra, my plea to the universe, Vote. Vote the principles of Lincoln, whether you are a Republican or a Democrat or an Independent. Persuade, Encourage, Influence. Liberty. Equality. Vote.

Something I have not done for months and months is binge watch television. I only have Netflix and several other channels, and for the last two weeks I have closed out Call the Midwife, Emily in Paris, and several other series. Flicking through the offerings, I came again on Downton Abbey, and started again with season one. I went along for several days, weaving a bit and the television.

Eventually I noticed a tiny disclaimer in the information lines that Downton Abbey was available to watch through May 31, at midnight. WTF. If I'd realized sooner, I would have prioritized my selections. I binged all day yesterday; I would watch until it went off the air at midnight last night! We got through World War I, and I glanced at the clock. It was 12:30 a.m. It was a gotcha moment; I'm locked on and will have this to watch to the end!

Then the realization, Netflix probably is a west coast company, and midnight still was three hours, as the world turned. I went to bed at once, so far beyond my bed time that two naps were required this morning.

Good news; I am totally packed for the show on Saturday. My last chore is to liberate some folding money tomorrow. The weather will be lovely. I reminded Beth of the list of what she must bring. She said the tablecloths were back from the laundry, and dazzling. 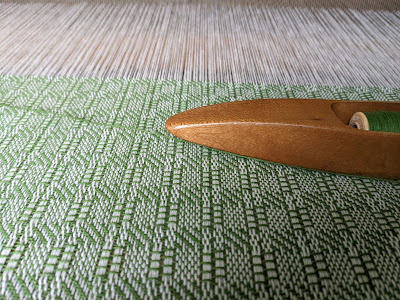 I am weaving grass green, but it won't be ready for the show. K wandered by the loom last week and remarked on the color, agreeing it's name is spot on. K is from Texas, where grass is yellowish. She says her Ohio yard exceeds any Texas yard she had.

Sunday Caroline, my last grandchild graduates high school. The ceremony is at Severance Hall in Cleveland, the home of the Cleveland Orchestra. It's a huge hall; I have not been there since I was an undergraduate at Case Western Reserve. 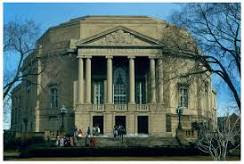 I was so happy to be invited, but had to confess, I could not walk from anywhere to my seat. I asked if someone would push my wheelchair. Beth called today with the plan. I will go to Ruth's house, with my wheel chair and France will drive my car, Ruth and me to Severance. Then, push the wheelchair to where Beth and Bill were saving seats. I neglected to ask if his new girlfriend would be with us. We'll see.

Posted by Joanne Noragon at 2:50 PM
Email ThisBlogThis!Share to TwitterShare to FacebookShare to Pinterest