Don't mess with my peanut butter and other sad stories

I eat the same thing for lunch every day. For real, day in and day out, unless I'm out to lunch. I have half an apple, quartered, smothered in peanut butter. Specifically, Jiff crunchy peanut butter. My grocery of choice does not carry standard Jiff, only small jars of organic, natural. Too expensive for me.

My brother-in-law very kindly picks up a two pack of Jiff for me whenever I ask. Their grocery chain carries the real deal, in the several pound two pack. I can barely lift it.

I needed to open one of the new jars, and hefted to pack from the shelf, cut the plastic binder and then bethought the current Jiff recall I'm reading about. I googled the problem and found my two jars of Jiff were in the dragnet. The news item said throw them out, but that's something over ten dollars. I'd prefer my money returned.

Tom would be in the neighborhood and pick up the jars for return. And I would go to Kreigers and buy one of those tiny organic jars to tide me over. Which I did. The peanut butter aisle had a gaping shortage of peanut butter. There was no Jiff, merely empty rows of shelves. I settled for Skippy, which I do not care for, with its inch of peanut oil on top of the jar. I do hate that!

Please J.M. Smucker, fix your manufacturing problem quickly. Before I'm even an inch down the Skippy jar. I will gladly throw that peanut butter away. 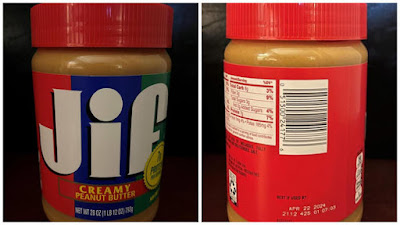 My new car is a new-to-me 2014 Suburu Forester. I have yet to master radio stations and cruise control. Tuning the radio turns out to be not my problem. Every time I got to 90.3 on the FM dial, all I heard was classical music. In desperation I asked my oldest daughter what the heck was going on. Her text:

All those CVL's stand for Cleveland, which is 45 minutes north of me, and carried a mix of NPR programming I enjoyed. Kent is WKSU, a small town east, in Portage County, with a decent university, but I always felt the NPR station was staffed by college students. WCPN is a commercial station playing classical music. I had far more interest in programming from Cleveland, a town with a world class university, Case Western Reserve, than a farming town with a decent university. 104.9 is River Radio out of central Ohio. That is south of route 30, where the state turns red.

There will not be a test. I barely followed that. This was not a recall, but a lack adequate funding, I am sure. I cannot find any article on the demise of Cleveland's NPR.

Posted by Joanne Noragon at 3:37 PM
Email ThisBlogThis!Share to TwitterShare to FacebookShare to Pinterest