And then they came for us

If indeed the leaked Supreme Court decision overturning Roe v. Wade comes to pass, it will only be the beginning of the loss of autonomy. The next legitimacy to be erased will be same sex marriage. After that, or maybe before, the few freedoms secured by transgender persons.

I cannot believe I would live to fight again for my right to make choices for myself.

I want to believe the draft was leaked by a clerk who hoped the roar of outrage would change or withdraw the proposed ruling to overturn.

What to do right now? Write your Senator that the filibuster must be ended at once. Then the Senate, which represents the 80% of the people who support Roe v. Wade can take up stalled legislation to protect the right to abortion and pass it with a 50% vote.

Next, we must maintain President Biden's majority Congress at our mid term elections in November. No "get out the vote" effort has been this important in a long time. tRump's appointees to the court  lied when they said Roe v. Wade was settled law. Gay rights are fresh fruit to go after.

March. Make a great deal of noise. Write letters. Explain to new voters the importance of the protection of their own rights and how fragile that protection is becoming. It is their personal responsibility to secure rights they have taken for granted. 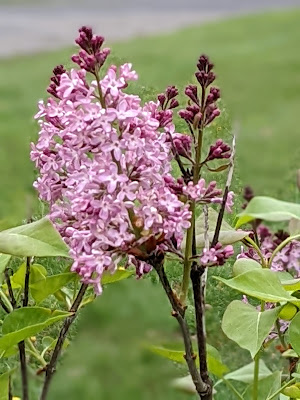 The calendar says spring here, but it's occurring so slowly. The flowers are slogging on through their appointed blooms. I had my first therapy session today. Lord, am I tired!

Posted by Joanne Noragon at 5:42 PM
Email ThisBlogThis!Share to TwitterShare to FacebookShare to Pinterest