I got up at eight on the dot-ish and didn't quit until time for supper. I did lie in bed an extra six or seven minutes, trying to persuade myself I could go back to sleep, but I didn't. I've stayed up too late several nights, finishing a book. Last night it was The Dutch House, by Ann Patchett, a Pulitzer Prize finalist, and a difficult to set aside book! 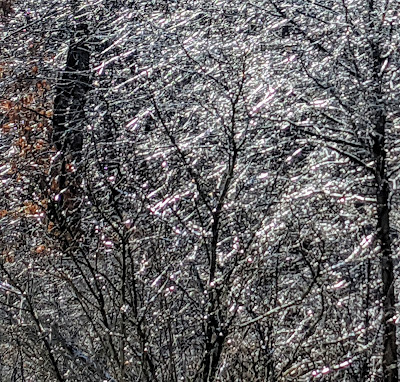 I took this picture yesterday, of sun on the ice covered trees. The trees have been ice covered since late last week, and all the sunshine has done little except make the ice sparkle. It will be cold and raining by mid week.

Over the weekend I did two things. The first, housekeeping on my blog. The second, reading a couple of books while housekeeping. I sent the bulk of my blog back to draft status, and read books while it executed. My blog is still out there for information that I may occasionally access. In the change over, I learned the hard way what happens to the blog rolls of followers. I see at least ten have left, to unclutter their reading list.

It is my understanding the inundation is over. The conversion reset the post date of each blog to the day I designated  draft, which caused them all to come crashing onto your blog list as current posts, then be inaccessible because they are drafts. I am so sorry and can assure you it will never happen again.

The Dutch House is the story of a house built by a Dutch gentleman in the mid 19th century, and purchased by a builder just after WWII. He bought the house as the family homestead, and the novel follows the influence of the house on its owners, caretakers, children, casual occupants and probably even the raccoons in the ballroom. It was a hard read to lay aside.

The only additional thing I have to report is a full circle of towels again. The emerald is done, the black is begun. Towels are available again!

Posted by Joanne Noragon at 6:44 PM
Email ThisBlogThis!Share to TwitterShare to FacebookShare to Pinterest