What I did today

For two days I wove on the new warp. The color is plum, and I wove it a long time ago. I load the colors to the web from a file on my computer, and there is a plum towel file, March 2, 2020. I had just begun selling the towels in 2020. This should be plum towels by week's end. 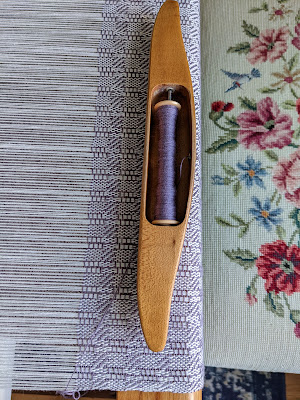 There were some naps in the new chair this weekend. I could become overly accustomed to having my feet up and my head down.

I have a short stack of books on my filing cabinet that I ordered before I broke my leg. They began with Suzanne and Gertrude, a novel by Jeb Loy Nichols. It is very short, a 133 page work of very good fiction.

It is the book I set out to order, after a small mention in, I think, The NY Times. Or else The Washington Post, both of which I have been strong armed to honor the pay wall. If you click through your cancellation email, to the last chance before NoThanks, they counter offer a year for $40, not $100.  I wonder what will happen next year.

So, Amazon got me, too. I ordered S&G, and it sent me a screen offering me a couple more books, since I liked that book. And I also ordered The Elephant Whisperer and Trooper. I have not tackled them yet, and wonder how they can interest me like S&G did.

It is a year in the life of a fairy non-verbal woman, except with her lifetime friend down the road. She is married to a man who intends to make the world better by doing the right thing. Suzanne cannot comprehend his plan of doing the right thing. Eventually he goes, to circulate among various refugee crisis centers, first in Europe and eventually hardcore centers, like Syria.

One morning Suzanne awoke to a donkey in her pasture. "Her days are a word-shy negotiation, caught between indifference and uncertainty. Into this world comes Gertrude, a wandering donkey. Together they form an unlikely alliance; each protecting the solitude of the other."

Other than that, it's the snow! We had another 18", and are not out, yet. Our snow remover needs to have a snow blower repair finished to unearth cars and the sidewalk. He estimates finishing tomorrow, and that will get me to my hair appointment Tuesday.

Posted by Joanne Noragon at 7:31 PM
Email ThisBlogThis!Share to TwitterShare to FacebookShare to Pinterest