I may go to sleep

EVERYTHING OLD IS NEW AGAIN

Here's a fun fact about rehab, or my rehab facility at any rate. They do not stock drugs like a hospital. The patient transfers from the hospital with no non-essential drugs. Their drug list is reviewed and scripts for the drugs are written, signed, submitted, then your drugs straggle into the repertoire.

When one goes home, all the left over drugs go with him. Miss L and I spent an afternoon punching pills from cardboard and putting them into the appropriate bottle. We even made a bottle for the oxycodone, and my physical therapist was so happy I wrote the strength and pill dose on the bottle. Such sticklers for the whole story!

When I was struck down by the attack of muscle pain, foot bottom and ankle pain, swollen calves, and inability to perambulate, my PC was grateful for all those oxy's and will even write me one more week's script if needed. Gawd, I hope not.

However, nothing is going away. And here in the great midwest, home of secondary lake effect snow storms, I keep being referred to doctor after doctor, racking up appointments for which I fill out an hour's paperwork.

My PC called to cancel our four o'clock because her three o'clock cancelled and she could get home to her blizzard ravaged county if I would agree to phoning it in. We had such a fun time chatting that a while later her PA called to fill in the facts and details, like my BP's.

Did I mention she put me on the pee pill? I despise them. The first time I took them against her script of several times a day, I like to killed myself. My kidney doctor helped my whittle it down it one a day, and eventually two a day. I'm on two a day now. I do not use the bathroom all day, but visit at least four times at night.

When not going to the doctor, I'm weaving. I've restocked two towels. 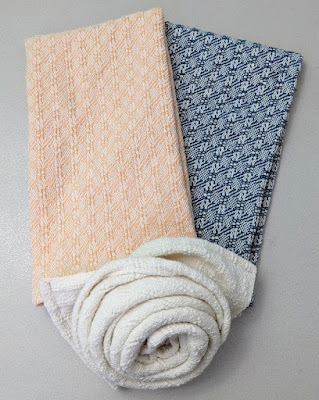 The next color will be cerise. Then a fun dark purple; I haven't looked up the name yet.

I decided last summer to buy CD's for each of my grands. That means Certificate of Deposit, in case anyone thinks the little dears are getting greatest Beatle hits. The two extra payments last year allowed me to go way over budget, and when I wrote the six of them a mass email, I certainly did not expect a reply. But almost at once, from the family of four children, I received a thank you from the two youngest.

And today, a thank you from France. I'm counting it as timely since I promoted the CD as last year's birthday, Christmas gift, and France celebrated each (both) only two weeks ago.

And France is his own promoter. He says the next time he is in town, we'll get together to reminisce.

Well, the last oxy has its fingers around my throat. I'll do something that will be OK to sleep over.

Posted by Joanne Noragon at 7:08 PM
Email ThisBlogThis!Share to TwitterShare to FacebookShare to Pinterest