Going to be a long, cold winter

The local schools are closing because it's too cold for children to walk to school. The good news--no more 5:45 calls from the person who made that determination.

We have a fun outcome to look around to find. There was a contest to name the Ohio Turnpike snowplows. Well, eight of them, one for each salt barn, where the plow is stationed. Snow More Mr. Ice Guy is stationed in the Boston Maintenance Building. The others have been named O-H Snow U Didn't; Ah, Push It---Push It Real Good; Snow Force One; Sir Plows-A-Lot (my personal favorite, but stationed far, far away); Snowbi-Wan Kenobi; Plowy McPlowface; and Darth Blader. 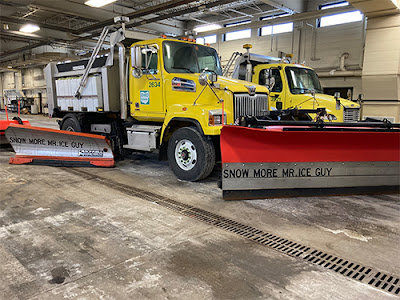 I don't know if the idea originated in Ohio. I have read of the contest being held in other states and municipalities. I haven't learned of any new names.

Today I emptied the loom of a warp I began last fall, September 6th exactly. Then a long hiatus, until shortly after Christmas! Now there are four towels on the wheel. I will confess, before someone trips me up, the cream towel is on the wheel for the very first time. In the past it has only been alluded to, via the little rose. I finished a couple of the towels today, to update the web page (everythingoldisnewagain.shop). Tomorrow I'll finish clearing out around the loom and begin turning on a new warp.

Or maybe I'll mop the winter from the floors tomorrow, and see if my loom fayerie shows up on Saturday. It does take her only two hours for a full warp and it takes me a week and a lot of whining.

Posted by Joanne Noragon at 6:45 PM
Email ThisBlogThis!Share to TwitterShare to FacebookShare to Pinterest