A few inches became the biggest single snowfall since the seventies!

When I was a patient at Regina I learned something about drugs. I appreciate them, but don't like them and often have considered kicking the whole protocol and thought I had a lovely opportunity to quit them. The first night there my drug orders had not caught up with me, and my worst withdrawal was the usual foot kicks, which I subdued by putting one foot under the other and sleeping.

The second night my right foot was not giving in to being subdued by the left. This was hard on my psyche, and my sleep. I was still awake when the night nurse came around taking vitals. A sturdy leg twitch caught his attention, and Mike asked if I was alright. I explained my drugless situation. He lifted the bottom of the sheet and trained his flashlight down. "Hmmm, serious restless leg syndrome," he dryly remarked. He said he could fix it and returned with a 2mg dose of oxycodone, which I had turned down at bedtime. It certainly "fixed it."

The next night all my orders had appeared and the rest of my stay was properly medicated, save the time the powers that don't think clearly withheld my Lyrica and I slid out of bed.

Fast forwarding to today, we had fourteen to seventeen inches overnight. Last Friday I had a text from my not too reliable drug store that my Belbuca prescription would not be available until today, when the order would arrive. I should have this figured out by now! My sister went by and picked up my Lyrica and I planned getting through to today with minimal Restless Leg Syndrome. I took half yesterday's dose and saved the rest for this morning, thinking my sister could drive by the drugstore this afternoon . 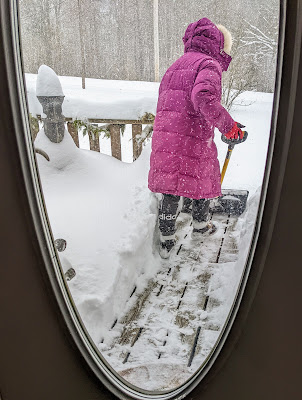 Only the dog found relief this morning. The ramp is packed as high as the snow on the left, which is just higher than a pair of wellies. Up to a set of knees. The cars are up to their windows in snow.

I made a couple of phone calls for a snow shoveller, to no avail. I'll try again tomorrow. 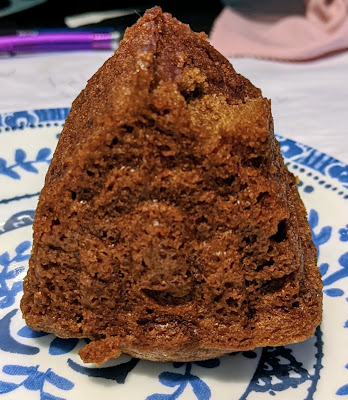 K's consolation prize: A fantastic, warm gingerbread cottage. I sampled the chimney on the way to table.

Posted by Joanne Noragon at 6:55 PM
Email ThisBlogThis!Share to TwitterShare to FacebookShare to Pinterest