My sister and I began weaving about the same time, in the early eighties. In a short time we had more than we could give away, and began exhibiting a local shows. At the time we lived in two different houses, in two counties, a good forty five minutes apart. One day she said if we really were to do this (weave and sell), we needed to be working from the same house.

The two houses were put up for sale and we began looking. One afternoon Jan called me and said she found a contender, and we should look at it together. 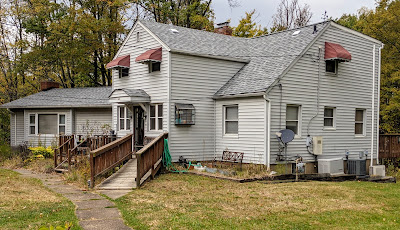 We bought the house in 1988, and wove and sold at shows until 2003. Jan was tired of weaving and had already begun quilting. That wing to the left was our studio. It held ten looms, and later on Jan's long arm quilting machine and all her sewing machines.
In 2016, more or less, the house was becoming a little more than we could physically maintain. It was sold, and I moved just a block away. Laura was beginning high school and I still worked for the township, and needed to stay in the township.
There were two offers on the house, identical in every way except the woman also would pay for the inspection, and the man said I must. I accepted the woman's offer. The man tried to start a bidding war, I turned him down. The house belonged to the woman and her mother, rather like Jan and I began all those years ago.
Kamaria, the new owner, was easy to befriend. She and Laura hit it off at once. I once posted a picture of the two of them on the fall MetroPark hiking spree. K has been Laura's go to person pretty much since they met. 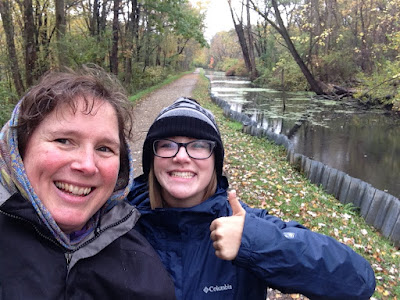 Back to the house up there, K lived here with her mother and her two sons. But in the last five years, K's mother has passed, her sons have graduated high school and are in college, and worst by far, before the vaccine, K contracted Covid, and now is a long hauler. There is nothing pretty about that!
Kamaria invited me to come live in the house some time ago, and I turned her down. But thinking of the winter to come, this past summer I called and asked if the offer still stood. So now I rent the two rooms on the right, on the east end.
You can see two windows of the front room, which is my studio. The little window in the middle is the bathroom, the back room is my (old) bedroom. I also have the laundry room, which is under the front porch, and my old bay in the garage (no more snow on the car!).
I hope that catches up everyone, and you will know to whom I refer when I drop new names. At least when I mention Kamaria.
Posted by Joanne Noragon at 7:32 PM