These last six weeks have been long! I am a type A personality, I guess. It may be something you come with, but I also know I was raised to not be idle. I learned to pass my radio, and later TV, time with handwork. I didn't teach myself, my mother put something into my hands.

And now, this stultifying pain doesn't give a damn what I am. I defeat it in large blocks of time by sleeping. That generally follows a night of not sleeping, and then, no matter what my plan, I fall on the bed and sleep away two, three, four hours.

I did that this morning. It put a serious crimp in my plans for the day, which were to pack an order, finish hemming the cerise towels and do the laundry, including changing the bed. In spite of three or four extra hours this morning, I got all of that done except bring the laundry back upstairs.

Dozing over my news feed this afternoon, who came in but Laura. After hugs and news, guess who lugged up the dry clothes and even made my bed. Laura, of course.

I did accomplish much of the rest, including this sort of victory lap picture: 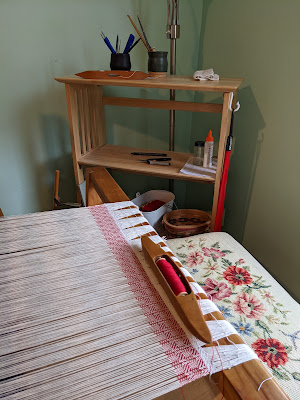 This photo taken October 3rd, after the run of lavender was finished. And this photo taken this afternoon, when I finished hemming the cerise and threw a few shots before leaving the studio. Two weeks. There is hope of accumulating some towels for the township's little show in early December.

I think this new color is emerald. I've had it for two or three years and can't match it well to the color chart.

Posted by Joanne Noragon at 6:52 PM