Been away a long time, it feels. Back now, and working up to a hundred percent. Had that long needled shot Monday afternoon; slept a lot since. Too much Novocain and dye. But I've been weaving, too, between naps. I'm about four bobbins from done. 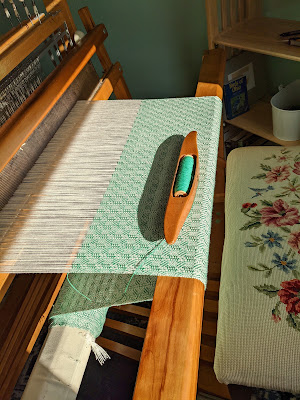 I like to pick out the next color and put it to the end of the row of spools. Soon, I hope to use the color I picked! 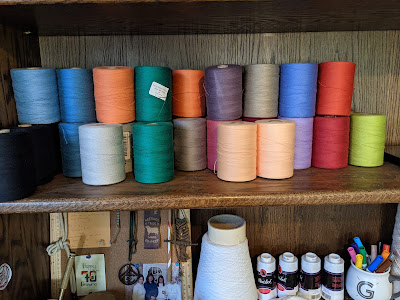 I'd picked kiwi to be next, you may remember, and then the last of the "real" greens left the shelf, so I picked emerald instead. That soft melon color toward the center presented itself as a good color to go next, until the last of the blue towels left. So, it will be a blue next, probably the next to the last on the left.

Physical therapy is ahead, too. There was very minimal walking these last six weeks, and I will not be back to my cane without serious exercise. That begins a week from Friday.

Today I did put the walker in the car and headed to the post office with an order. It was not as cumbersome as I expected, and the clerks were happy to see me again, though they assured me my deputies had done well.

The car has not been started since the end of August! The door did not unlock by a push of the button. In the driver's seat, the engine had no intention of turning over. So, I sat in the warm sunshine and waited for AAA to come start it. The fellow told me I had about 45% of my three year old battery left.

There is a problem I still must solve. Food! Meals on Wheels will not cut it, at least not the food prepared for Summit County, Ohio. Portage County seems to produce better meals, but Summit is an abysmal disappointment.

Last night I had Salisbury mush steak with a layer of salt gravy, mixed veggies and cubed potatoes coated in salt and paprika. Even limiting myself to the potatoes and veggies, I had a raging headache.

Tonight I had ziti and two tray portions of veggies. Even scraping most of the meat sauce off the ziti, the salt content was overwhelming. My esophagus and stomach burn. 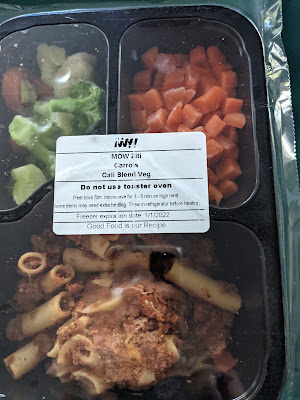 Last night I spent a lot of time investigating the delivery capability of local restaurants, and finally coming to the conclusion I could not afford that. I thought about it on and off today, and a phrase jumped into my mind: Ready made meals near me. Bonanza.

I found a dozen sites on the internet, and the meals look healthy. Something to investigate tomorrow, between weaving, having a car repair made and visiting with my sister.

Posted by Joanne Noragon at 6:39 PM