I just took the last blueberry crostata for the month out of the oven. Yum, for lunch tomorrow and the next several days. 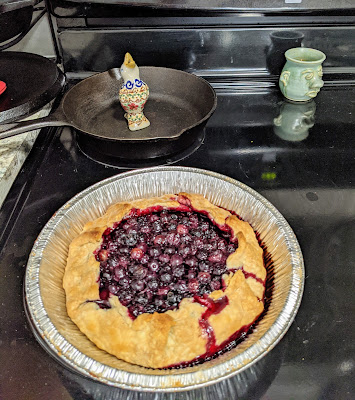 So, no time like now for the cherry custard recipe. Custard is comfort food. Don't let this put you off: my most enduring memory of custard, way past my grandmother spooning it into my little mouth, is of my dad. Over the few weeks of his last decline, he ate only custard, three or four ramekins a day. I believe he would have had nothing to eat, except for the pills. He and mom had a deal. He could die at home if he would take all his anti-seizure meds, and he swallowed a lot of pills in a lot of custard. That was long ago, in February, 1978. He called Janice and me "daughter" when he spoke, because he couldn't remember our names. I don't remember what he called our brother or mom. Anyway,

Baked Custard: (this is the basic recipe, in the event you need a good one)

I made cherry custard by omitting the sugar, vanilla and salt, and substituting a small jar of tart cherry jam.

All ingredients at room temperature. I use the glass mixing bowl for the baking pan. Crack four eggs into the bowl. Froth the eggs well with a beater. Next time I will use the hand blender to chop the cherries smaller. Many sank to the bottom, which was OK, but a lot more in the custard would have been nice.

Add the milk slowly, continuing beating the eggs and jam. Put the bowl into a pan of water and put into a preheated 350 degree oven. If using ramekins, it takes about twenty minutes. In my standard mixing bowl, it took an hour to set. The custard is done when a knife inserted into the middle comes out clean.

I will make this again, over and over. I will experiment. I will use only half a jar of jam next time. For maximum servings, I would slice the custard in half and each half into thirds for serving. The slices lift out reasonably well. As I said, it was very tasty and was gone in four servings, so I will be a tad less piggy in future. 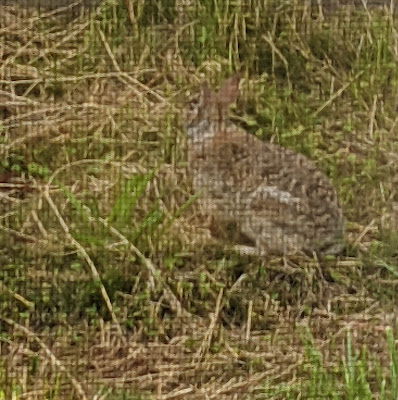 An amazing picture. I happened to glance up from the table and there it was. It hung about for perhaps five minutes, not moving. I don't know how long it had been around. It didn't hurry off, but it did look carefully around between every bite.

I tackled a long overdue project this morning. I know I said I would sell the books on line, but the site I found offers about a dollar a book. My book avarice has declined, but is not yet under control. So, I decided to tidy the area, see how much room a year and a half of books consumes, and then make other decisions. 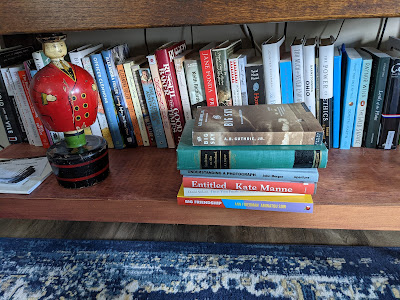 You may recall, the original lot consumed half of the front of the shelf, standing, and the other half lying in the side. I moved it all to the back and commenced a new row standing. 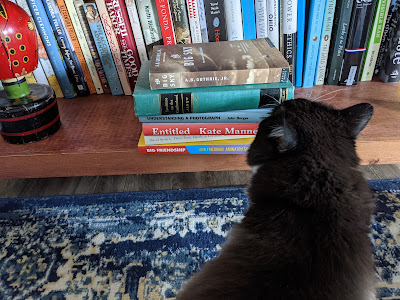 The project required close supervision of the cat. 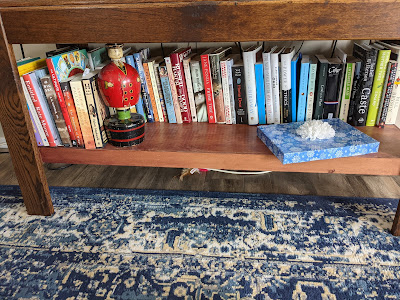 There is ample room to acquire more. At least a year's room on that shelf. I keep the box because ...

I received a birthday gift, probably the year before Covid. It has a lovely, lacy little adornment on top. I remember my friend's husband telling me how much time he spent crocheting the lace, and there was a lovely little gift inside. Later there was such a falling out over the gift, and nothing I could do would set it right. I keep the box visible as a reminder of the value of a friend and the cost of losing one.

Posted by Joanne Noragon at 2:51 PM