Except that most mornings I do not go out and pot up my carload of mandevillas and hang them for my street to admire, it was the normal busy day for me. (I hate that leading space that eventually catches my eye and I must stop all and go delete it!)

Yesterday I staged this morning. I got the plants from the car and put them on the bench. I carefully, carefully went back to the shed and brought the hanging basket frames up by the plants. The three together are mighty heavy, especially to carry with one hand.

I poked my thin old skin on some protruding part of a plant hanger, and I felt myself bleeding, all the way back to my improvised plant stand. But I could not look at it because I can only do one thing at a time, and I was walking.

Back in the house I arranged the rest of the required paraphernalia on the counter, and retired to the loom or the television. I don't remember which it was. 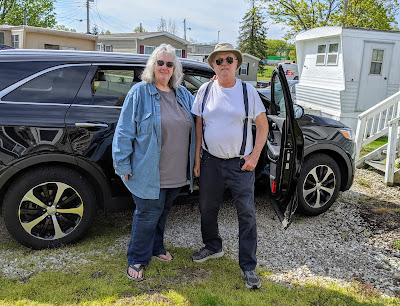 Promptly at ten this morning, my sister and brother-in-law pulled in to help. The picture is when they were leaving, but no matter. Jan is nearly eleven years younger than I am. She got the white hair. What did I do wrong?

In twenty minutes Tom and I had the plants potted up, and he hung them. It was the hanging I needed; when all the dirt goes in, I cannot lift the baskets. Jan watered them, and they left.

I came in the house and spent an hour weaving. Then I was really hungry, and came to the kitchen for lunch. Time for the cherry story. 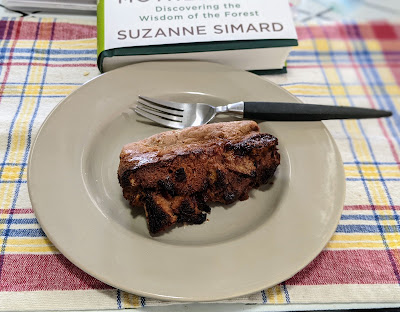 When I assembled all my ingredients for cherry custard the other day, having no idea if I should use a tablespoon of jam or the whole jar, I decided to start with bread pudding. I do have three jars of jam, and I did use one of those jars in the pudding.

The smell of the pudding is wonderful. It's like being in a cherry forest. The first bite filled my head with cherries. It was a lot, but not too much. I used about two and a quarter cups of milk and four eggs. No sugar; that was all in the cherry jam. When I make custard, I'll use an entire jar of jam.

I read Debbie's find on resolving thick jam. Reheat the offending batch and add brandy. Fortunately, I have no brandy on hand. I mentioned I actually used one jar of the jam. When I realized I preferred it on my toast, not beside. I ran my little jar through the microwave, then stirred vigorously with my fork. There was no getting round too many cherries, but the jam turned to thick juice and it could all be distributed across a piece of toast.

At this point it was mid afternoon, so I took a nap. All that potting was exhausting. In an hour I woke up, spent half an hour deciding my TV remote actually needed new batteries, as opposed to an irate call to my IS provider. I found them in the junk drawer, and watched the better part of an episode of Letterman's My Next Guest.

Then supper, and here I am. When I am finished with that book, I'll tell you about it. Finding the Mother Tree, Suzanne Simard. In the meantime, the mandevilla, and the Gerbera daisy. 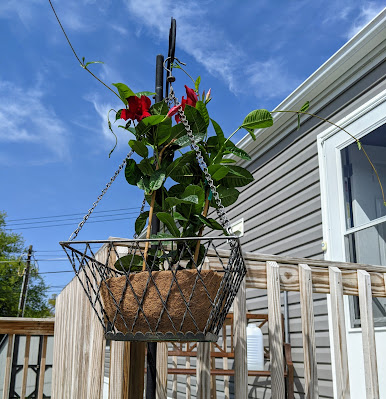 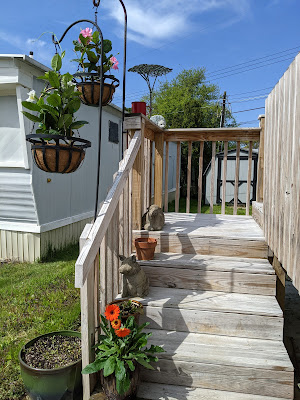 Posted by Joanne Noragon at 7:25 PM