I've worked steadily the last couple of days to get to the end of the current warp. In fact, I got there last night, and that also included weaving 800 yards or one tube of natural, and so there should be six cream towels going into stock.

This morning I spent straightening up the studio, preparing for a new warp, prepping the towels I took from the beam. I putzed in the kitchen, cleaning surfaces, changing out winter for spring. I love these place mats. 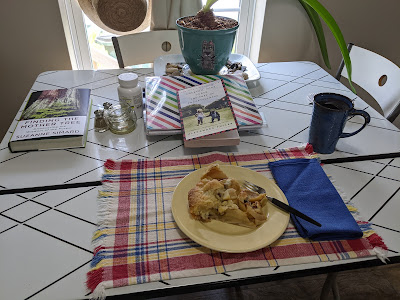 After lunch, with the idea of turning on a new and possibly longer warp in front of my eyes, I wondered if Laura might be available for the weekend. She said she would at least call me to say goodbye, and I haven't heard a word.

"Hello there," her ever chipper voice said, down the line. Tomorrow will not work because she is leaving for a short WWOOF assignment in Cleveland, at an inner city food project. "Darn!", I grumbled. I'll have to do this all by myself!"

"What's wrong with the rest of today?" Laura wanted to know. I left at once to pick her up and by two this afternoon she was on the hardest part of dressing a loom--putting on a warp. 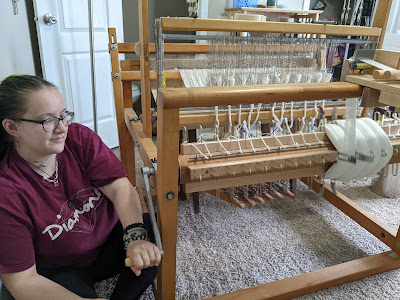 "A member of your fan club is missing the thumbs up," I suggested. 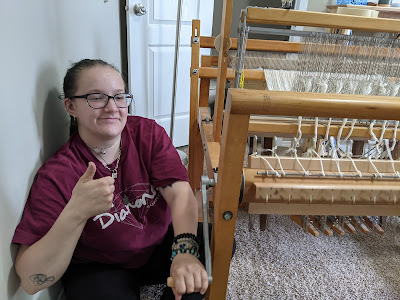 Well, dressing a loom is no more fun to her than it is to me. We kept steadily at it, emptied and changed out 32 tubes of warp, and finished in two hours.

When Jan helped me by changing out the emptying warp tubes we were done in two hours, too. But Laura put an extra 25 turns of warp on each bout. I believe that will yield an additional twenty towels, but I haven't done the fine math yet. 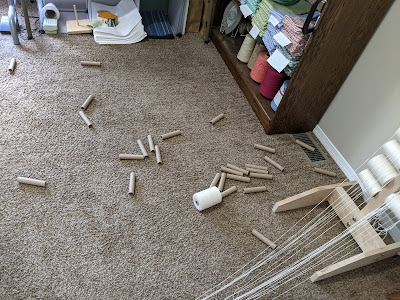 Every time a tube emptied, I tied on a new one and heaved the empty over the warp threads. That made the kid laugh. "And I always thought of you as super neat!"

We stopped at the local tavern for a hamburger on the way home. And back in her neighborhood, I took some pictures. 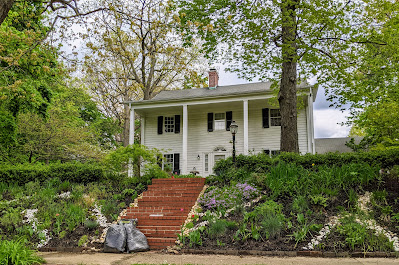 When we had the problem at the old trailer with drainage in the little flower garden, Ellen Abbott suggested we make a drainage route with flat stones. That's what these folks did. Pretty neat. 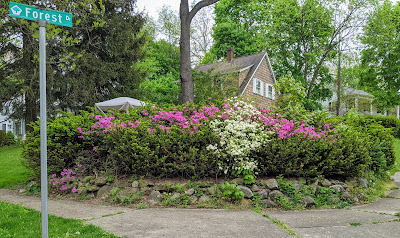 And I'll always be a sucker for stone retaining walls.

Posted by Joanne Noragon at 7:26 PM