I am bone tired! Too much of many tasks! I went to a town fifteen miles north to pick up my banner for the booth at the Peninsula Flea. I've been there before, to order and pay. I followed the trusty Google app, and paid little attention to where I went.

Today the app went completely berserk, and thought I intended to walk to an intersection along the route. I could not reset the app. I knew I turned on a numbered highway, but I could not remember the name or number. My phone kept rerouting me to the intersection back at home.

I called the sign store. The lovely receptionist is a landmark follower. Have you passed Starbucks? I had to cut across mightily to convince her I drove by road names and numbers; landmarks are a waste of time. I finally got her to remember street names and route numbers, and I arrived! 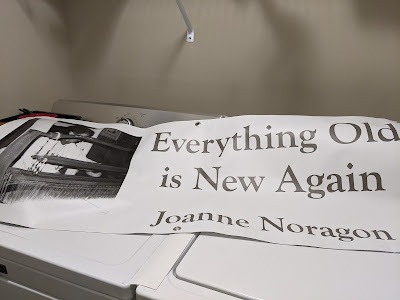 Pretty neat, eh? Another box ticked. It's rolled up and ready to go.

There was an email this week from the gallery owner, with her usual recap of business in April. She noted there might be a problem with staffing the gallery on Sundays; two artists had to cut back on hours.

When Diane first opened the gallery, I was pretty much done with shop keeping, so I declined her offer of work in exchange for a lower commission. And now I'm a bit unstable, possibly unsuitable to work.

Sunday is such a low traffic day, Diane was considering not being open that day. And that is anathema to this old retailer. So after a couple days consideration, I said sign me up for Sundays.

Diane was not amenable to start, but I convinced her to give me a shot. They had scrambled and covered most of May, so I am not on the schedule until the first Sunday of June. And if anyone wants out of their Sunday in May, I'll be there. 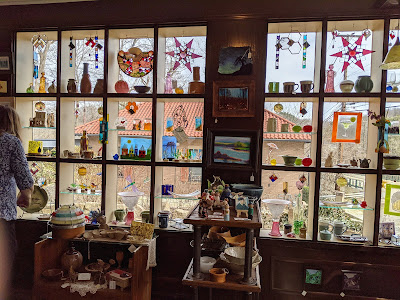 Posted by Joanne Noragon at 4:29 PM