Another day of nothing

I moved snow again this morning. It takes fifteen or twenty minutes to clear the path. Yesterday there was a rather large overnight dump, and it's trash day, so I cleared and cleared and cleared, until it was obvious my trash cans are not going to the curb this week. There is no place for them to be stationed. 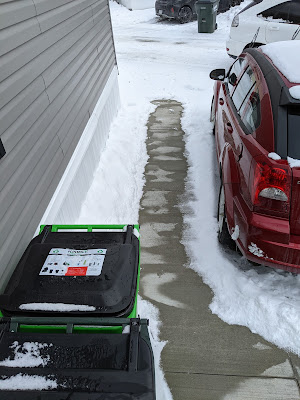 My "front yard" is as deep in snow as the skirting, where I've piled the snow swept from the path. My across the street neighbor has appropriated a bit of the street, and if I do the same our one and a half lane street becomes one lane. No sense tempting some fool to run over the trash. It can wait. 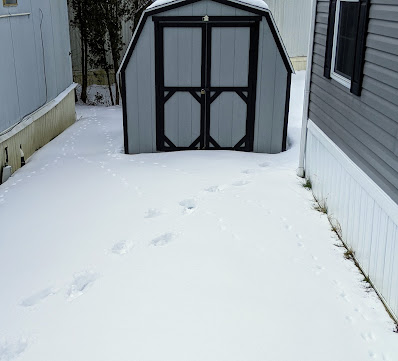 I see a two legged person cut through between units. That's not allowed, but seldom enforced. That's about six inches of snow around the shed. It's melted down a bit each day. 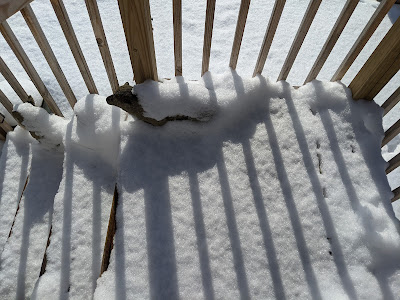 I had to shovel only one morning; it's been light enough for the broom the other four or five mornings. Each morning when I'm awake enough, I look out the window at the cars. Each morning there has been a fresh layer of snow on the cars, 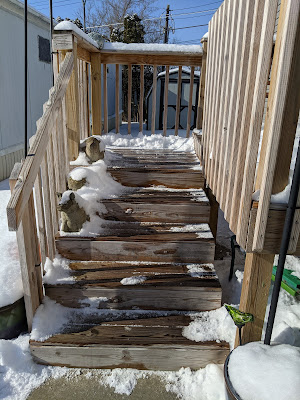 which I take as my job to clear off.
Yesterday so many days of moving snow had me down, and I didn't weave. I spent the day with my feet up, knitting in hand, watching Hinterland. I'd watched a few minutes of it, but my daughter suggested, if I liked Broadchurch, I'd like Hinterland. So, down another British rabbit hole. The thing is, I have to watch to the end to know if I liked it.
I'm off on another adventure this afternoon. So pathetic. I have a doctor appointment, and this time I will have that transport, a ride in the wheel chair back that long distance I'm now obliged to park away from my doctor's door.
We all need this quarantine, this lock down to end. We must get on with the 21st century.
Posted by Joanne Noragon at 1:57 PM