Back when I was the township fiscal officer, I had a lot of extra time and energy. I became clerk in 2004, when I was only 61 years old.

I wasn't the youngest kid in the meeting room, but I researched the local townships before I started, and had a list of what I wanted to do. At the top of my list was a web site. I had several designers make proposals to the trustees.

When they had proposed, one of the trustees, with whom I regularly locked horns, had a friend of hers, who built web sites on the side, make a proposal. The trustees selected him. Or as I used to say of myself, the official with no authority.

Here's a link, http://www.bostontownship.org. Take a peek. Its a sweet little site, outdated even when I was there and struggled to maintain the pages the "webmaster" never updated as technology evolved.

One of the trustees and I were excited to have it to start recording township history. I see that since I left, nothing has been done except publishing the minutes, twice a month. I started pumping history into that web site like I was canning peaches. I stood at the scanner many afternoons, Saturdays, and a few Sundays, scanning two hundred odd years of township minutes and uploading the files.

I poured in all the history the town historian had accumulated. I think he was relieved to be relieved of his burden. He even finished projects he'd begun, like the history of the cemeteries. I know he has more to upload, but no one to do it.

Accumulating the history of The Boston Park began because I happened across an obscure reference to the CCC working on the township roads. When I followed up with the park, I was informed there is no such record. That got my back up, of course, especially because the town historian said some locals remembered.

So, I researched and interviewed and footnoted and laid out my findings. Take that, National Park. If I had not made a record of this verbal history of Boston Park,  I wonder if you would have plowed under the entire park! 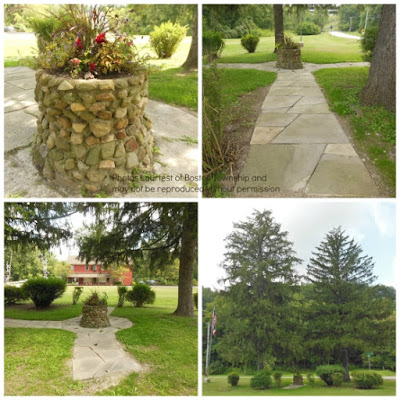 I took these pictures four years ago. In the top right, the park goes several hundred feet north up Riverview Road, and in the bottom left goes several hundred feet west up Boston Mills. The red building in the background is Zelenski's General Store, in private ownership until Mr. Zelinski died, and then bought by the Conservancy for the Cuyahoga Valley National Park. The same Conservancy that bought the golf course.

I took these pictures today, until a foreman escorted me off the grounds. All that is left of the park is the flagpole, the cedars and the planter, which they have assured the trustees will remain as part of the history of Boston. 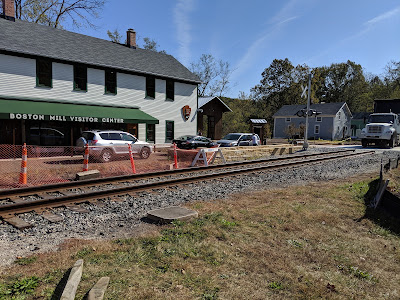 Zelinski's is now the new visitor center for the National Park. 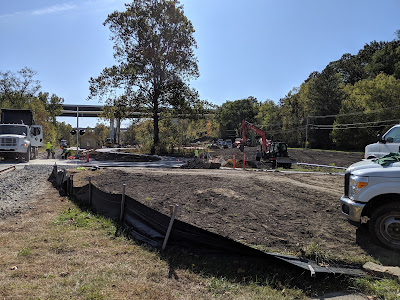 Looking north, you can just make out the train station. It used to be on the other side of Boston Mills, across from the Park. But as any fool can now see, in order to board the train, passengers must pass through the Visitor Center where all sorts of souvenirs are available for purchase. I am the most angry that the Park feels at total ease in rewriting our history! And, history is written by the victors. 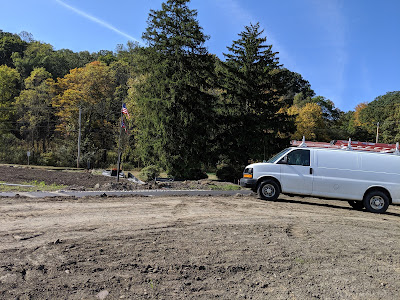 Looking down to the park at the corner of Riverview and Boston Mills Road. I was walking down the berm of the road to take a "new" picture of the scenery above, and especially the sandstone walks, when I was intercepted by the foreman and asked to leave. I replied I would leave when I got my picture and kept on walking. I got past the white truck before he stood in front of me. So I asked him to move, and took the picture below. 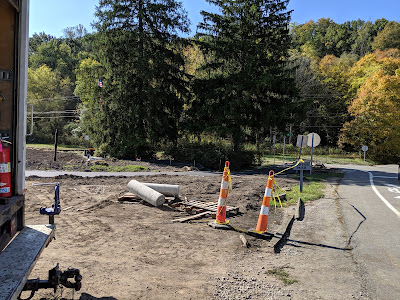 He walked me all the way back to my car, and even opened the door for me.

Posted by Joanne Noragon at 7:28 PM