I know folks who have no drug regimen. I know those who take far more drugs a day than I do. I take six.

Synthroid—my thyroid crapped out years ago. A specialist follows the problem, does a fine job.

Simvistatin—I think every person over a certain age takes this drug, or one like it. We are the giant pool feeding the statistics for heart doctors united against strokes and heart attacks.

Diovan—Since before the stroke, I’ve taken a blood pressure med. The AMA or someone continues to lower the bar. In the beginning my doctor tried kind after kind of BP medication, and they turned my world around. Imagine dreaming you must make order of a chaotic warehouse that will be invaded by Black Friday type customers at 8 a.m., waking up in the dream, stark naked, to a screaming mass breaking down the door. That was the alpha blocker dream. Never mind the beta, etc. Unsettling dreams nightly. I yelled at my PC, she was throwing spaghetti against the wall to see what would stick. She slammed shut the chart (olden days) and icily said “Would you like a specialist?” My heart doctor is a great guy. Every doctor weighs you and takes blood pressure now. It’s part of the system. Last week my blood pressure was 90/60. “Wonderful!” said the tech. Patient said nothing. I worked hard to get here.

Lyrica—Fibromyalgia. It means your muscles hurt. Nerves are responsible. All the nerves in my spine, that has a broken vertebrae, a cadaver bone fusion and a long list of crushed discs, scream. Fibro is a mean one. No cure, just control. That’s decent, though the cost is obscene. Insurance! I’m getting to that. 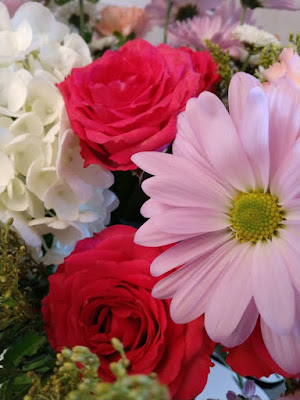 Keppra—anti-seizure. This is my second newest bit of drug protocol. Doctors in the brain injury business are totally against seizures, and order Keppra. When I began recirculating among my real doctors, my old neurologist, from the stroke days, immediately cut the Keppra dose in half and ordered an EEG and a CT scan to see if I needed it at all. We both thought I was asymptomatic. I passed both. But, the neurologist quit the practice and went to a research university to do his Alzheimer research. His replacement raised my hackles by asking me to ask my other doctors why they were or were not doing various protocols. Not my job. I have no credentials to relay the information. I found a new neurologist. Like many of my doctors, the one I related to is in a different major hospital system here. They don’t share information with each other. If I were in charge, I’d bang heads together and solve that easy problem. Instead, I still must take Keppra. It promotes unspeakable dreams. The warnings include suicide, and if I can’t get all these guys on the same page, I may threaten it. Last EEG is Wednesday. The new neurologist intimated his next step is to read the EEG and tell me how to quit Keppra.

Belbuca—For years before the fractured skull, I used prescription NSAIDS to handle the residual pain and keep on walking. I saw a pain doctor on and off, to no avail. Narcotics literally wipe me out for hours; I wake up and can function on the residual four hours of pain relief. The pain fellow’s surgical procedure was a total bust. The NSAIDS were a contributor to the bleed from the skull fracture. I quit them. June, July, August at home, I was just a mess of pain, and finally went again to the pain doctor, with little hope. He offered a new sort of opiod. It had to go through a pre-authorization, rejection, doctor certification procedure. That took about five days. This is some authority’s scheme to end the opiod crisis in this country. The initial script was filled three times. New script, the procedure begins again. I did not know the preauthorization  began again, or I would have been sure it began sooner. My insurance company wants to override Belbuca with a four hour skin patch. Adhesive removes my skin; I would be an open wound using it. Belbuca dissolves in my cheek, in the time it takes me to take care of the cat and make breakfast. I am up to the doctor certification part of the giant dance on my new Belbuca script. Today is my third day without a pain med. I would like to stand in the road and scream What the Fuck is Wrong with you Fools?

I played cards today. I warned them I was pretty crabby, stand aside. Nancy and I beat the boys roundly! 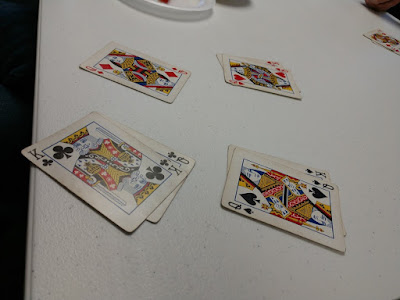 Soon I can take some Lyrica and sleep for eight hours, until my spine wakes me to get up tomorrow. Then another sixteen hours of tears on my eyelashes. When I hurt this bad, I cannot stop them. Made it hard to see the cards, but I prevailed.

Posted by Joanne Noragon at 7:36 PM