My head is spinning, literally, and almost actually.

Cast your mind back fifty or more years. How did demonstrations happen? I remember a constant sense of awareness. Walking to class, seeing an “activist” acquaintance. “Hey, man, the word is out…”, and so forth. We weren’t radical, we just were students who could walk into a group of acquaintances and find ourselves walking down the middle of a street, arms locked, chanting.

After my disappointing conversation with Laura last night, and another restless night, I went out to breakfast. Before I left, a flurry of texts with Deb, who was “in on it,” and Pam, who I hoped to recruit. I told them Hudson would be tough; we’d have to be out on the sidewalk, and where to park? I said I’d call the Peninsula police chief and ask his advice.

On the way to breakfast, I called one of the two trustees remaining from my tenure.  It came to me, what is more Mom and Apple Pie than a protest in the middle of Peninsula. He had no problem with 303 and Riverview, outside the town hall, except for visibility, and suggested a couple more conspicuous spots. But, at ten in the morning it’s not visibility. Traffic is gone. It’s media coverage.

I pitched protest to Lynn, over pancakes and bacon. She loves me dearly and turned me down flat. She could not bear the idea of her picture in the paper.

I called the other trustee. She was all for it, and will be there. We can park in the town hall, because it’s “the normal course of business.”

I called the last trustee, who did not run for re-election, and is not for having his guns confiscated. He did agree magazines could be smaller, background checks better, assault rifles banned, and, yes, he would come after all.

I called the police chief. He put it on their calendar, not a problem.

I began emailing the press. We have three newspapers of note. By the time I hit the last send, I heard from the first paper, in Hudson. “Didn’t you used to be in Boston? What’s this protest all about?” Like he hadn’t heard of the National School Walkout. It was an adversarial interview, to say the least. I said we were protesting nothing, we were standing for something. He said to take a picture and send it. I said send a reporter or miss it.

The Akron paper hopes to feature it in a local story of all the protests. I told her I was available to answer questions.

I was invited to attend tomorrow’s trustee meeting and pitch the Walk Out to the third paper, that covers our meetings, as well as our new Fiscal Officer, who takes the minutes and updates the web pages.

I still have two weeks and a lot of local citizens to get involved.

And signs to have printed. 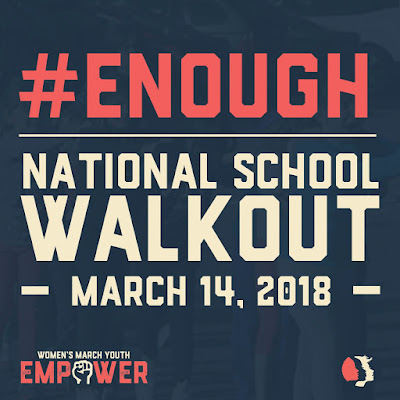 Posted by Joanne Noragon at 4:01 PM