I must leave in half an hour and retrieve Laura from a sleepover of young women who boycotted the annual Sadie Hawkins dance. She has not missed a high school dance since she started, and last year went with the young man Tom, I believe, compared to an undertaker.

This year the little gang decided boys are not worth it, and didn’t go. At ten dollars a ticket, that’s sixty or seventy dollars not in the school’s social budget. Plus ten each for any boys left behind. It’s good to learn all the ways to protest things you want to complain of.

In the absence of the cook, I took my neighbor to dinner last night, to a family style restaurant. We were surprised by the number of young couples, suits, ties, short dresses, corsages. Of course, Sadie Hawkins. They were sweet to look at.

There is a long hall to enter the restaurant, and on the way out it was lined with folks leaving a birthday party. The guests of honor seemed to be the very old couple using walkers. It was a slow exit, and Cathy and I just greeted and chatted with all the folks lining the hall. I could have been them; I took my cane for the long walk from the parking lot.

I finished off the evening falling into YouTube songs. I think I jumped in from some blog posting. It knows my preferences, of course, and the sidebar was lined with the good guys. I amused myself with Green Fields of France, by every group who ever sang it, and finished up with an hour of “The Highway Men.”

Remember Willie Nelson, Johnny Cash, Waylon Jennings and Kris Kristofferson, bringing edge to country music. I always admired the way Cash put his power behind that group, to support strong music. I saw them in person a couple of times. I’ve seen Nelson since, in the Bob Dylan tours.  Willie would rip off his red bandanna and throw it into the audience at the end. A young friend always stood at the edge of the stage, but never scored a red bandanna.

Kitchen puttering this morning, I see my orchid is sending out another blossom shoot, which certainly will be in flower in March, as it has been for the last ten years. 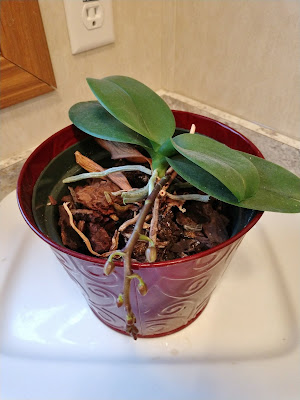 The windowsill is maxed.  Alberta's redbird and pie bird have been
there since we moved in, together with the butterfly and Marty Froelich's vase. The egg separator and the tea jar are new.

The snow is new. It began overnight, and we're in for some inches of it this week. 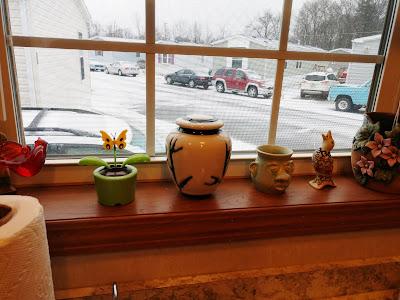 The flowers need a larger vase. I'll look for one next week. 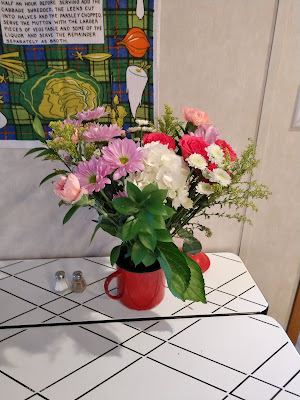