I looked for the box score I was following last night, but it’s gone and I cannot find another. It must have been a good game; the score changed several times in each quarter, and not in six or seven point increments. Always twos and threes. I said to myself, it must be a good game.

I left home with six minutes left in the last quarter. The boys in blue were down, 25 to 23. When I pulled into the end of the line of cars fifteen minutes later, the scoreboard was still lit, and the band was not “playing” everyone off the field.  I supposed the game was just ending. The score was across the top of the board, and I could tell both numbers began with a two.

The band has a protocol I approve of. Actually, they have their own rules of sportsmanship, like not blowing their instruments for a bad play by the opposing team. No badmouthing the other team or band, that sort of stuff. And, they “play” everyone off the field. The drums beat a cadence as the home team and opposing team depart, as the other band marches off, as all the patrons leave. Then they march from the stands and across the field, to the cadence. It’s pretty neat.

It makes the evening longer, because not only have they emptied the stadium, they still must go into the band room and change out of their uniforms.

Not too long after I pulled into line, the cadence did begin, so I settled back to listen to the last act of Los Angeles Radio Theater, and watch the people stream away. Eventually, the stadium lights were out and the band began coming out of the school. Finally, Laura.

There you have it. The game is away next Friday. Instead of 12:30, I’ll probably get to bed at 1:30 or 2. A.M., that is. But tonight I must leave in 45 minutes to take the little trumpeter, and me, to the indoor band show, wherein they play their entire repertoire from the marching season. I’ll take the camera, and leave my hearing aids at home. 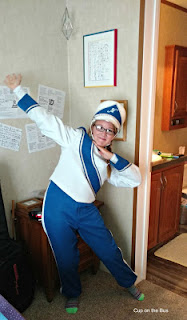 Posted by Joanne Noragon at 5:43 PM

Email ThisBlogThis!Share to TwitterShare to FacebookShare to Pinterest
Labels: Laura