Acceptance to an art show, especially the first time, is dependent wholly on pictures submitted. After the first time the jury looks for work that is new, fresh, growing, but, it’s still all about the slides.

Fiber can be a challenge to photograph, and I looked for a photographer who could do this kind of jury slide. At the studio I found the job was well done; rugs photographed from a height, bags in nice little groupings, and shirts laid on a good background and photographed with attention to weave structure and colors.

We were accepted to some decent local and regional shows, and, of course, next I tried for the big time. My first round of applications to national shows included an application to the Smithsonian Craft Show, and the rejection letter included jury remarks the clothes would have presented better on a model.

I took that letter straight to town and slapped it on the counter at the store of my friend Chris, who kept two artist galleries in town. Chris heard out my rant about judging a bird by its feathers and other such analogies. When I got done he said, “Joanne, get a model.”

My new photographer, in upstate New York, put my clothes on the same woman who modeled all the garments he photographed, and Jerry photographed for a lot of fiber artists. His model lived down the road from him, in Woodstock. When he had a job for her she left her garden, walked up the road, put her hair up on her head and modeled, dirt under her fingernails and all. 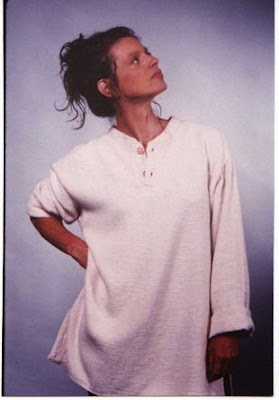 One day Jerry said he wasn't photographing garments anymore; his model quit. Someone had complained about her wrinkles, and she quit. What to do? I got by on the old slides for another year, but pushing the old slides to three years is so risky.

I thought of my friend Gail. I took her and a stack of clothes to a new photographer not far away.  I told her all she had to do was put her hair on top of her head. She came out of the dressing room with her hair up, the natural skirt and jacket, wearing black heels and carrying another pair which she had brought. The other requirement for modeling for me turned out to be bare feet. And so we carried the last several years of weaving. 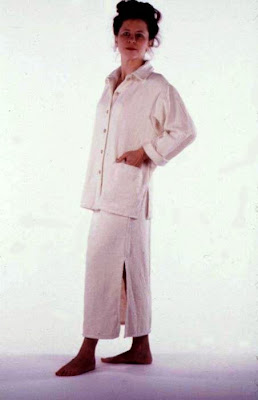 Weaving again, I really feel the Smithsonian jury’s remark to put the clothes on a model. Helen, my quiet studio lady form does not complain and does not come to meals, but she just isn’t enough. Fortunately, I still have friends. 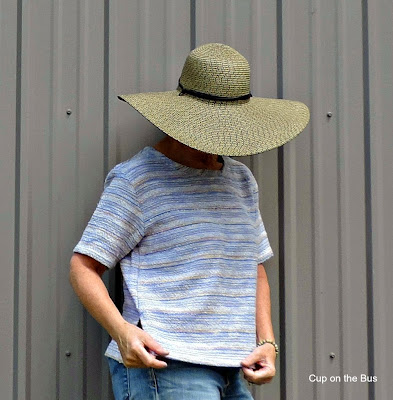 The girl in the hat and the periwinkle shirt. She's modeling the denim shirt at the top of the right column, in the Etsy button.

And no, I never applied again to the Smithsonian show. They really were out of our league, but that letter taught me a lot.

Posted by Joanne Noragon at 7:20 PM