When I bought the big loom last summer, it was both an adventure and a venture. I did not know the outcome; I wanted to see what it could be. It was therapy, too.  I am still working out the life changes of the last three years, letting go my plan to retire from work at the end of my current term is wrenching. Now I must continue working. What if I am not reelected to a forth four year term?

So, I bought a loom. Therapy, I told myself. Of the mental sort.  That lasted as long as the first loom for fun did, in 1983. Suddenly too much was woven, let’s go to a show. The whole bit becomes like the earworm song; it gets under your skin. The new products, the customers, the show atmosphere. People have come to enjoy themselves and it’s the exhibitors job, and to their benefit, to be sure the people do. So, the Etsy shop.

I retired with an enormous customer list. Several computer upgrades later, it is lost. I doubt, too, those customers still have their AOL accounts. How does one market these days? It seems social media oriented. I asked in a person to help me sort it out, and the advice became a long list on yellow paper. It stayed on my desk and I tried, but I do not grasp the nuances of social media; the list is on the shelf.

Perhaps the Etsy shop will be self taught, like our first weaving business. I know my audience and what appeals to them. I do not understand how Pinterest, Twitter or Facebook are used these days to build audiences. It seems one must cast out thousands of pins and twitters to attract a “gate” of  ten thousand through the door, a thousand of whom probably will stop at your booth and a hundred buy, and that is a good show. And perhaps that’s how the young millennials shop on line. But, they aren’t my customer, on the whole.

It’s still about casting the pebble into the pond. So, I decided to try a blog hop. I did that once before, on a far smaller scale, and had Hail Fellow, Well Met conversations with some new bloggers. I’ll be trying it again; I put the link to Vicki Boster’s blog on my side bar, in case anyone else might be interested.

I hope for a lot of lookers, and if some of them look in my shop, and some of them….well, you get it. Nothing ventured, nothing gained, they say.

I thank all of you for being kind and helpful to me these several years. I’ll still write old stories (I remembered one about having to eat an escargot), keep you updated on the adventures of an old grandma whose granddaughters’ combined ages equal less than half of hers, and you can bet on a couple more weaving stories along the way, too. 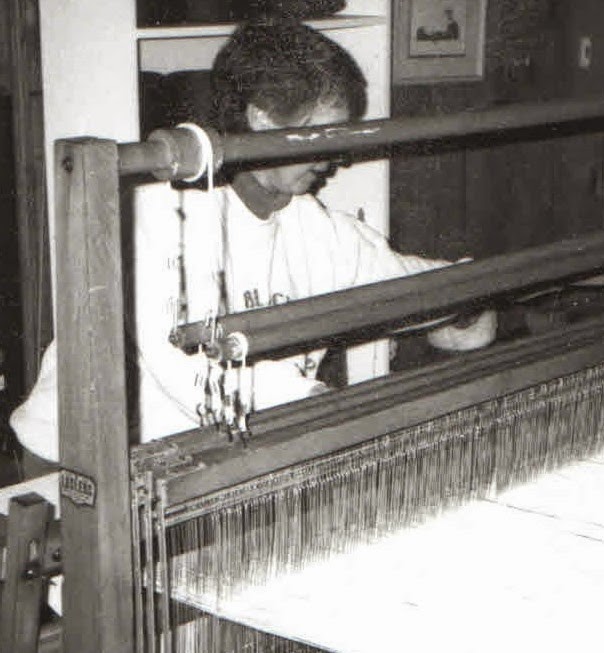 Posted by Joanne Noragon at 4:19 PM