Slate roof for the old girl

Our town hall was at the end of the life saving renovations when I became the township clerk. We were not fiscal officers back then, just clerks.  Actually, nothing has changed about the job in twelve years, including the pay.

As a wet behind the ears clerk I had the pleasure of the power of the purse over the national historic renovation company overseeing the restoration.  A local craftsman was sub-contracted to reproduce the schoolhouse bell tower. 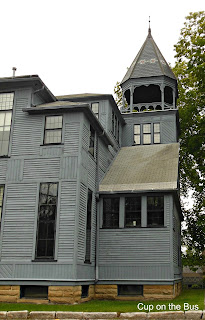 Using old photographs he reproduced the cupola, the railings, the banisters, the pillars, the shingle pattern, the weather vane. The bell tower was the final structure and the renovation company's final bill was among the first order of business when I took office.

But, the local craftsman came to the office, explaining the renovation company, the general contractor, refused to pay him, for the reason the bell tower exceeded expectation, and they thought his bill did, too.  In my opinion the bill was completely reasonable, cheap at twice the price, even.

I found nothing in the contract that disqualified exceptional work, so I simply told the general contractor that until our townsman was paid their final check (high six figures, I might add) would languish on my desk. The president of the company called.  Liens and lawsuits were threatened.  I told her I thought it was foolish for someone so big in such a small renovation market to risk their good name for so few dollars. They hand delivered their check to our craftsman.

But, I digress. That roof is only twelve years old, and has several repairs.  There are deteriorating shingles visible and not visible, the building has so many roofs. 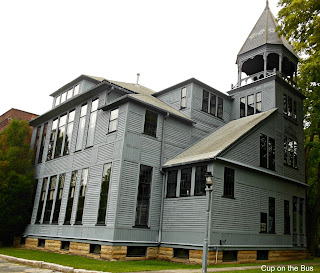 This is the wood schoolhouse.  The first and second floors are divided into two large classrooms each, on either side of the building. The pushed up parts of the roof were offices. These days the lower floor is rented for receptions and parties, the upper floors are professional offices. 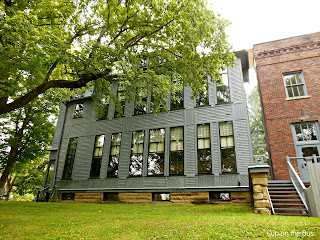 The building from the other side.  More "penthouse" offices and a good view of the brick schoolhouse, added in the 1920's.  The buildings are actually connected; the connector is sided in bright shiny aluminum that reflects what it sees.  The brick schoolhouse has a flat, mastic roof.  It surely will outlast me.

The wood schoolhouse shingles, however, did not.  The committee that manages the buildings (the same committee that doesn't like how I park!) knew the wood building lacked only slate shingles to be complete, and several years ago began a fund raising drive.  The cost would be $65,000.  As ambitious as it seemed, the goal is reached.  You eat an elephant one bite at a time. 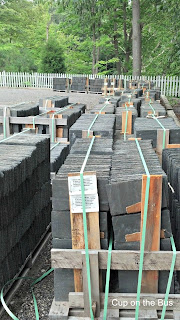 The shingles are delivered and staged at one end of the equipment yard.  Won't be long, there will be pictures of workers hoisting slate shingles and putting them down. 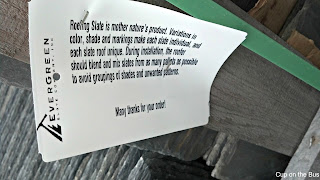 This instruction is stapled to every pallet. 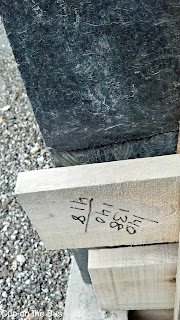 I'd bet there are 418 shingles in the three rows on this pallet.

Posted by Joanne Noragon at 7:38 PM