Our cat population dwindles; we’re down to the old man, Purrl, and Toby, the two year old parking lot kitten.  Ryon, the silver and grey tabby, took an afternoon nap on the sofa last January, and didn’t wake up.

Toby misses Ryon’s ear licking.  Toby licks my arm and rubs his ears on the spot.  Poor fella; I’m not about to lick his ears, although I will scratch them until he hollers Uncle!

Toby hasn’t asked for a new kitten, which shows good judgment on his part. Until all these grandchildren came to fuss him up, we had the luxury of a bedroom for cats plus two guest bedrooms.  Now the box is hidden away upstairs, and sometimes Toby races up those stairs just as fast as a little kid who played outside too long.

We had a cat door and still do, but it was stoppered up while Purrl was in his adolescence, after a couple of unfortunate raccoon visits to the cat and dog food bowls.  Purrl and his late brother, Jazz, learned to ask at the door to come and go.

Ryon was the next foundling we took in, and Jan deemed him an indoor cat.  He was six or eight months when we got him, and an indoor cat.  He came for his looks; we didn’t think he could outsmart the great outdoors and certainly not the hawk rookery that has been established across the road these last ten years.  Ryon was always on the look out to make a break, but the several times he escaped he was back in a few hours, to go to the bathroom and get his supper.

Toby came as a four week kitten, a certain hawk treat if he left home.  In spite of the coming and going of Purrl and an occasional escape by Ryon, Toby has no interest in the outdoors. Perhaps after that pitiful night he cried away in a parking lot in Pittsburgh he knows out is not place to be.  He’s the inside man.

Today Grandma’s Gardeners pulled a few weeds and spread a lot more mulch.  Toby looked on from one of his windows. 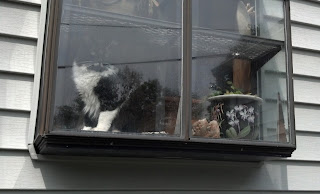 Purrl generally sleeps on the gravel under the studio window, but I didn’t see him when we started on that side of the porch.  Then there he was, under the peony bush.  I called and he did not move.  Not a whisker. My heart sank.

Laura came over.  “Purrl, get out of there.”  The old fool came out and got a belly rub from Laura, while Hamilton put mulch under the peony.  The he went back and resumed his nap. 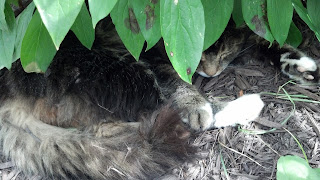 Posted by Joanne Noragon at 7:02 PM