Sending the children back to school

This is another one of those when I was young “I walked up hill to school, both ways”.  Which I did.

We went with a new notebook, and later on mom might buy a package of notebook paper for writing themes and such, if last year’s package had run dry.  Most work was done in pencil, although I can remember writing essays out in ink.  Announcements and permission forms came home via child and were returned the same way.  Some announcements were made on the PA, and children were totally responsible for having those fulfilled.

Fast forward to educating my grandchildren. Announcements concerning the current school year, which began last Wednesday, commenced at the end of last school year.  Why do they do this?  Because there is electronic media available to send requests and requirements down the line at the speed of—electricity.

It seems to me, having enrolled these children last year, I could at most check and sign off on a list of facts about them.  I’m still completing pages and pages, times three: their address and who to contact, what meds do they take at school (are nurses’ stations  loaded with drugs to be doled out!  What is going on?!), are they allergic to peanuts.

The supply lists! The book lists (when I went to school texts were passed out the first day and returned the last.  Do not write in your books, children!).  The fees! The fees!  Band is one hundred dollars per.  Lab fees.  Science fair fees (yes, science fair is a requirement!).  School pictures.  Gym uniforms.

I get daily, or more, announcement/reminder emails from the high school, the middle school, the band.  These used to be called morning announcements, children, remember to tell your parents.

I refuse as much as I can.  The grand kids know there is precious little money to spare; they fill in their school picture packets and I see twelve dollars worth of pictures checked. Hamilton and I had a pretty good laugh about the senior pictures.  I bought the cheapest sitting, two poses.  I told him he got one pose with his suit jacket on and one with it off, pick his favorite for the year book.

I looked over the price of pictures while he was being shot—hundreds and hundreds of dollars. We could have a sofa portrait for three hundred dollars.  Hamilton over the sofa, not on it.  A mantle portrait is four hundred dollars.  Notice to relatives—Hamilton’s senior pictures will be cash in advance, and may or may not include a suit jacket.

I do not remember going through this for my daughters, who graduated high school in 1982 and 1985.  Beth, in fact, completely bypassed senior pictures by announcing at the beginning of the prior year she had accumulated enough credits to graduate.

The internet is to blame.  Without it our children would still be responsible for their schooling. 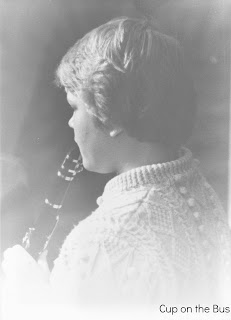 Graduated in 1985 with pictures.  I wonder where they are.

Posted by Joanne Noragon at 7:24 PM

Email ThisBlogThis!Share to TwitterShare to FacebookShare to Pinterest
Labels: grandchildren